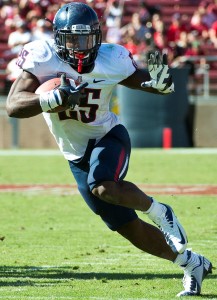 It’s rivalry week in college football and the Grand Canyon State joins the party Friday night when the Arizona St. Sun Devils travel to take on the No. 24 Arizona Wildcats.

The winner of this inter-state tangle takes home the Territorial Cup, which is currently held by the Wildcats following their road win at Arizona St. (6-5, 4-4) last season. According to this week’s college football odds, Arizona is a 3-point favorite to retain the cup. The over/under is listed at 68.5 points.

Arizona (7-4, 4-4) has won two straight games and four of its last five to makes its way into the BCS poll for the first time in head coach Rich Rodriguez’s inaugural season in Tucson. The Wildcats exit a solid 34-24 win at Utah as 3-point road underdogs last week.

If the Sun Devils are to make it two straight wins this week they will have to contain the nation’s leading rusher, Ka’Deem Carey. The sophomore running back has been brilliant for the Wildcats, running for 1,585 yards and 19 touchdowns in Rodriguez’s spread attack. Two weeks ago against Colorado, Carey set a new Pac-12 record when rushing for 366 yards and collecting five touchdowns.

While Carey leads the Pac-12’s second-ranked offense in the Wildcats, Arizona St. counters with the conference’s second-best defense. Graham has a defensive background and in fact was Rodriguez’s linebackers coach at West Virginia, so he should be well-versed in how to stop RichRod’s high-powered attack. The Sun Devils have been particularly adept this season at getting to the quarterback. Their average of 4.3 sacks a game leads the nation.

It should be fun to see if the Sun Devils ‘D’ can put a collar on Carey and Arizona’s spread attack. If they can’t, the Wildcats seem poised to easily cover the 3-point spread and retain the Territorial Cup.