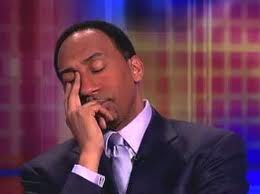 I was sitting there, delving into the reheated roast pork, kidney beans, white rice and caramelized onions that I had cooked for dinner the night before.  With hours to go before work, I had time to sit back, relax and catch the first half of last Thursday’s highly touted Knicks-Heat game.

An hour or so before pre-game, SportsCenter went to their obligatory, courtside Stephen A. Smith interview.  Now more than ever before, Smith has become the network’s go-to guy for all things unintelligible.  As the players warmed up in shoot-around behind him, Smith stood on the floor of the American Airlines Arena, microphone in his hand and as pompous as ever.

Smith was doing his feeble best to report whether the Knicks’ leading scorer and viable MVP candidate, Carmelo Anthony, would play later that evening.  The night before, ‘Melo dove into the stands to save a loose ball and slashed the middle finger on his non-shooting hand, requiring five stitches to close.  His status for Thursday’s game was uncertain.

Rather than give any actual late-breaking information, which is what I thought journalists were supposed to do, Smith took it upon himself to tell the viewers, and I paraphrase, that this game meant too much to the Knicks, and the rivalry, for Carmelo Anthony NOT to play.  With no apparent desire to relay any useful information from someone within the Knicks organization who might actually know whether ‘Melo would be in uniform that evening, Smith swore up and down that ‘Melo would play, almost going so far as to call him a pussy if he didn’t, as if Stephen A.’s bravado means anything to a franchise trying to win its first NBA championship in forty years.  The Knicks are not about to jeopardize their star player for an otherwise meaningless game in December. 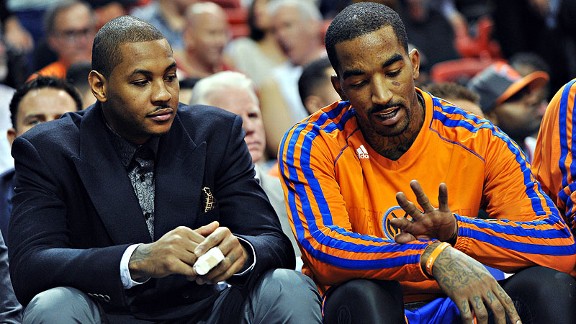 I sat there yearning for a truth I never received, for Carmelo did NOT play that evening.  Stephen A. was apparently the only one in the building who did not know that.  Ironically, the Knicks still won the game handily, ‘Melo’s absence that evening as unimportant as Stephen A.’s presence.

Smith, who at one point in his career must have been a respected enough journalist to land the hours of face time he receives on The Worldwide Leader, has become a parody of himself, routinely reporting opinion rather than fact.  I’m as avid a sports fan as they come but it’s gotten to the point where I can’t hit the mute button quickly enough every time Smith comes on the screen.  I’m not suggesting ESPN fire the guy.  Clearly, yet rather inexplicably, he must have some fans.  All I’m saying is a little news would be nice.

Bitching about Stephen A., his partner in crime Skip Bayless, and the increasing casualness with which ESPN reports its news has become passé but I still couldn’t help but pile on.  To quote Sergeant Friday, “Just the facts, ma’am.”  That’s all I need to know.  Attaining that information by actually asking someone within the organization is always a good start, unless of course they don’t want to talk to you.  In which case, I can’t say I blame them.

30 thoughts on “Don’t mind me. I’m just complaining about Stephen A. Smith again.”