Here at SportsChump, we like to play a game called Wheel of Dunces: Commissioners’ Edition.  With the bone-headed moves our sports commissioners bless us with on a regular basis, we could actually play this game more often but who has the time to micro-manage the incessant blathering of tyrannical multi-millionaires.  Some of us have real jobs.  Their antics, however, would make for an interesting reality show.  We could call it The Real Commissioners of Beverly Hills. 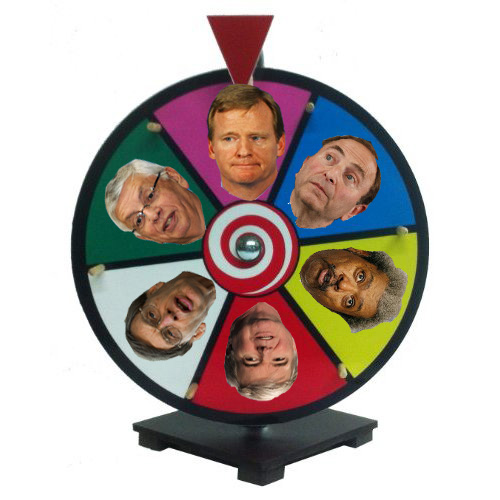 This week, the wheel of Dunce-ness falls squarely on the head of NFL Commissioner Roger Goodell, which must take some skill considering our most recent winner, NHL Commissioner Gary Bettman, is currently presiding over a sport which has no season.

The whole episode we NFL fans have come to know as Bounty-Gate was bungled so poorly by Commissioner Goodell that by the time it was all said and done, a former NFL commissioner, Paul Tagliabue, had to come in and do Goodell’s job for him.  Goodell’s an attorney by trade, yet his mishandling of the events in New Orleans made it appear as if no legal brief had ever come across his desk.

Can you imagine that happening at your job?  If your boss was forced to bring in your predecessor due to your ineptitude, wouldn’t your employer think he’d have no need for you in the first place or at a minimum think you were a bad hire?  Wouldn’t they be talking about you behind your back, discussing your absolute worthlessness as a human being?

Last summer, it became public knowledge that the New Orleans Saints’ coaching staff had placed bounties, otherwise known as incentives, for their players to intentionally injure opponents.  Based on Goodell’s findings, players and coaches were suspended, the franchise was fined and their entire 2012 season was lost.  It was the stiffest fine in NFL history. 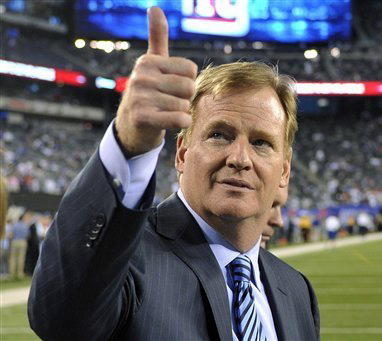 In the wake of the suspensions, the Saints started 0-5.  Head coach Sean Payton was not allowed anywhere near his team… until Roger Goodell found it in his heart mid-season to allow him to see Drew Brees break Johnny Unitas’ record for most consecutive games with a passing touchdown.  That was the first indication that perhaps Payton had unfairly become the fall guy for the entire scandal.  So much for the stiff arm and consistency of Roger Goodell’s authority.

According to Brees’ recent comments, Goodell has little credibility.  The bitter Brees, player representative and all-around nice guy, blasted Goodell and the league.

“What I would like to see is a level of accountability on the part of the NFL and Commissioner Goodell in regards to [the] mishandling of this entire situation.  We as players hold ourselves and are held to a very strict code of conduct both on and off the field. We have to be accountable to that, as it should be, and I feel like they should be held to the same standards.

“If someone would just come out in the league office and admit, ‘You know what? We could have handled this situation better,’ it would go such a long way with both players and fans. People would really come around to realize what this thing was all about because right now the league office and Commissioner Goodell have very little to no credibility with us as players.”

Of course, were Brees an NBA player, David Stern would probably have had him executed for saying such a thing.

It’s safe to say that Goodell overreacted considering the penalties he assessed came before all the evidence had even come to light.  He’s presiding over a league that is at an all-time high in terms of popularity yet faces a tenuous future considering the long line of impending law suits and increasing amount of injuries in the game.  Plans to eliminate kick-offs to increase player safety have met with mixed response.  By the end of Goodell’s reign, the game will look a lot different than it did when he first took office.  We can only hope that’s for the better.

Until we spin the Wheel again, Goodell remains our Dunce for the month but rest assured, it won’t be long until someone knocks him from his perch.  Let’s just hope he hasn’t destroyed the game we love before that happens.

Will you be placing a bet on the football this season? Have you decided where you are going to make your online bets at? Make sure you come and check out the latest sports betting odds at coral today!