“I’ve got two tickets to paradise”

“Doc, you made a time machine out of a Dolorean?”

Okay, people, I still have prizes to give away thanks to the good folks at A&E Sports, so let’s put our imaginations to the test.

One of the age old, hypothetical questions guys in bars ask each other after tipping back a few is, if you could travel back in time to see any band at any particular moment in time, who would it be and why?

My answers never sway.  After all, how could one pass up the opportunity to experience a young Jimi Hendrix, Led Zeppelin or Rage Against The Machine in the very first smoke-filled pubs they played?

This time around, I thought I’d incorporate that time travel argument into the glorious world of sports. 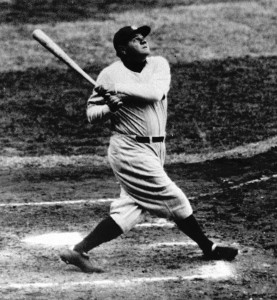 Let’s say you had one free pass to travel back in time to witness one team, one sporting event, one season, one very special occasion.  What would it be and why?

Would you travel back to 1927 to see Babe Ruth knock 60 home runs out of Yankee Stadium when the rest of the league could only hit 20?  Would you opt for ringside seats to see a young Cassius Clay shake up the world by knocking out Sonny Liston or perhaps to Hershey, Pennsylvania the night Wilt poured in 100 points?  Would you travel back to 1936 Berlin to see Jesse Owens win four gold medals in track and field, raising a middle finger to Adolf Hitler and single-handedly proving the Arian race was not all it was cracked up to be?  Or would you head back to the mid-70s to attend UCLA where a long-haired redhead named Walton rattled off 88 straight wins under the tutelage of John Wooden?

I’m going to stop spouting out ideas so as not to spoil the fun but I’m giving you all one time machine and one round-trip ticket, so you’re not stuck in Nazi Germany.  The contestant below who can best describe where, when and why they’d like to travel will win another fabulous, SportsChump prize pack.

May the biggest dreamer win.

71 thoughts on “One ticket, one time machine, one contest”