What was supposed to be a peaceful Thursday evening at the SportsChump household, spent with Lance, Oprah, LeBron, Kobe, some rigatoni with spicy turkey sausage and a nice bottle of pinot, turned suddenly hostile when a fellow blogger, the Full Court Pest, found me on Facebook and tried to convince me that Dwight Howard was a solid, offensive presence.  I guess that’s why they call him the Pest.

A fellow, net-dweller and hoops aficionado, I’ve always respected his opinions on all things hardwood but when it came to his unwarranted fawning over Dwight, I had to draw the line.

We ultimately agreed to disagree until the following morning when he messaged me again and asked whether I thought the Lakers would miss or make the playoffs.  Such is the topic of this debate.

A lot has been made of the Lakers’ woes this season.  I’ve even written about the personal joy I’m experiencing in their suffering but I never expected them to miss the playoffs.  I’ve never been one to get reactionary like the pundits at ESPN, TNT or the L.A. Times, declaring their chances dead with half the season remaining.  I will admit that with every loss, their post-season hopes get harder to defend, but forty games is still a lifetime away.

So, without further ado, here are the arguments: the Chump versus the Pest.  It’s time to choose a side.

The Lakers WILL NOT make the playoffs by Full Court Pest 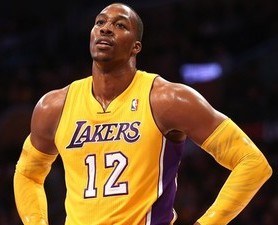 In discussions with the prolific Sports Chump we got onto the Dwight topic. Orlandonions (guess?) have distinct opinions on the guy. And like all discussions about the Lakers recently it eventually turned to playoffs. This is the moment when we get to see inside the mind of a Magic fan.

After discussion of all Dwight’s flaws were presented, Chump seemed to keep his faith in D-12. I thought the Lakers were in it till about Christmas. Not so sure anymore, so I explained. The Chump was unwavering. Howard/Kobe/Nash/Pau and the Lakers are too good to miss the playoffs. So he challenged me, using the rituals of the ancient ways (both of us being ancient), to a blog off. I had been served.

Chump picks the Lakers making it. Here’s what I think.

The problem for the Lakers this season is their schedule.  L.A. has 17 wins with exactly half the season played. They’re in 12th place but only five games behind the Rockets in 8th.

The problem is the league’s schedule clearly chose to drive the Lakers off to a large running head start with a plethora of home games. What remains is a gauntlet of road games against very good teams. They were supposed to win them. 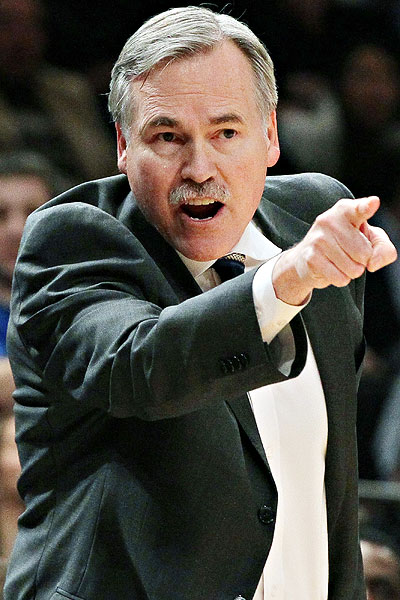 Instead they were spent on injuries, inconsistent play and coaching changes. The Lake Show lost to teams they should be beating for bitter losses. The return was inconsistent defense and a hole to dig out of.

Let’s assume you need at least 42 wins to make it in this west. That’s what Golden State got in with when they swept Dallas. But that team was totally changed after a deadline deal.  It’s usually higher than 42 and into the 50s but hasn’t been lower since the weird 1999 50-game lockout season. To reach this mark, the Lakers need to finish the season 25-16 which is the pace of a 50 win team. Looks possible but the hole is even deeper.

Over their next 10 games they have 7 road games against MEM/PHX/MIN/DET/BRK/BOS/CHA/MIA. The home games are the Jazz, OKC, and NOH. The likely result? Being conservative, I don’t see more than .500 over this stretch. That requires sweeping sub-.500 teams and beating a winning team. LAL has had difficulty competing with athletic teams and containing guards, bad news in a league this loaded with athletic points.

That leaves them with 22 wins and 31 games to get them in. AKA a 55 win pace. On the docket after that trip they play LAC/BOS/POR/ATL/CHI/MEM/GSW/SAS/HOU, quality teams at home and DEN/OKC/ATL/IND/GSW/LAC/POR, all good teams on the road. 16 games that are all going to present problems for the Lakers.

Let’s pretend they sweep all the other teams. That means they have to go 5-11 just to get to 42 wins. With their chemistry and level of play, that actually seems like a challenge. So for each loss to a mediocre team they need to win another game against the list of good teams above. 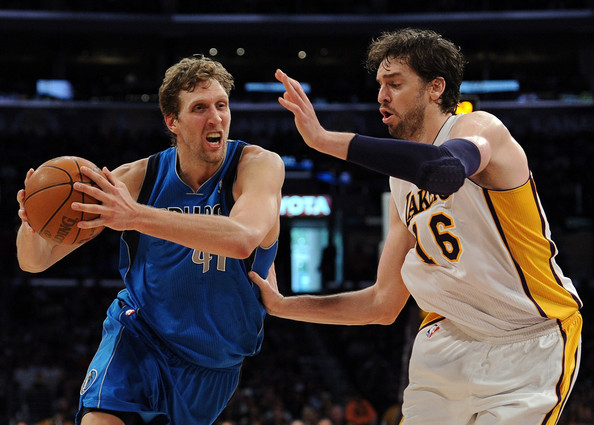 If they split with Dallas (home and away) who have Dirk back, they have to go 6-10 against good teams. There aren’t many gimme games for LA. These Lakers are not going to go 8-8 against the winning teams on their own floor.

Dallas is important.  With one more win then L.A., they have not counted themselves out for playoffs. Dirk is just starting to come back to his usual form and they’ve gone 5-1. Their only loss was to the Thunder in a thrilling overtime game but it’s clear the Mavs have come out to compete again. Portland, Houston and Utah are sitting in even better position in the conference with significantly more wins and all of them appear worthy of the last spot.

Perhaps trading Pau Gasol will change the game but it’s hard to think of a player who’s available while capable of solving the Lakers’ issues. Deciding to wait on a Pau trade seems to have backfired. It seemed to make sense before the season started. Unfortunately following through on that plan has fallen through on a team whose time has run out.

The Lakers WILL make the playoffs by SportsChump

La La Land, please put down any and all sharp objects.  It’s not time to panic just yet.

I’m not saying there isn’t cause for concern.  Of course, there is.  Your Lakers are currently seven games under .500, getting outhustled on a nightly basis and losing to teams they shouldn’t in ways they shouldn’t. 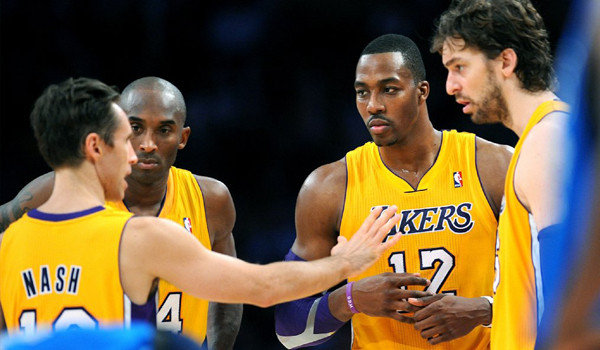 But we’re only at the season’s mid-way point and by the time it’s all said and done, that locker room full of Hall of Famers will figure out how to win enough ball games to sneak into the playoffs.

I’m not going to belabor this argument from an overly statistical standpoint.  As expected,  my counterpart, the Pest, has already compiled some long-winded, over-worded, not to mention number-crunching analysis of the Los Angeles Lakers and their opponents for the rest of the season.  That’s what he does.

What I’m here to tell you is this.  Despite the fact that their defense is as porous as Manti Te’o’s “I have a girlfriend” story, the Los Angeles Lakers simply have too much talent for them to miss the post-season.  I refuse to believe that a team that boasts 32 combined All-Star Appearances, four Defensive Player of the Year awards and three MVPs, can miss the playoffs, even if Mike D’Antoni is coaching them.  One would have to think they’d just start playing defense by accident.

As difficult as it is for me to defend these Lakers, they clearly have enough firepower to make the playoffs in a watered-down NBA.  They are currently 4 ½ games back of the eighth seed.  That gives the Los Angeles mind trust (there is one, right?) plenty of time to figure out what the hell is going on and how this team continues to rattle off losing streaks. 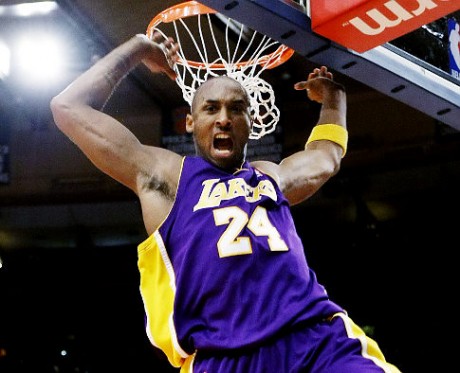 In addition to the rather unscientific, “they’re-too-good-not-to-figure-it-out” argument upon which I’m basing most of my defense, here is another relevant statistic.  While it’s true that teams in recent years have needed as many as 50 wins just to crack the eight seed in the Western Conference (OKC/POR/SAS in 2009-10 and DEN in 2007-8), this year’s Western slate is not as deep as it has been.  The current eighth seed is hovering around .500 which leads me to believe the Lakers can get in with just over a .500 record.  As the Pest accurately pointed out, that happened as recently as 2006-7 when two Western teams, Golden State and somewhat ironically, the Lakers, both made the playoffs with only 42 wins.  That very same year, the Orlando Magic made the playoffs in the Eastern Conference finishing two games under .500.

While the Lakers shouldn’t hang their headbands on these numbers, it is likely that finishing at or around .500 should be good enough to get in, considering that’s where the 7 and 8 seeds (Utah and Houston) are currently residing.

Here’s another fact to keep you Lakers fans feeling all warm and fuzzy.  Since he’s been in the league, only once has Kobe Bryant missed the playoffs and that year, he had Chucky Atkins and Chris Mihm as his running mates, not Steve Nash and Dwight Howard.

I’ve watched enough Laker basketball this season to know they’re absolutely putrid on both ends of the floor.   That doesn’t take a seasoned analyst to figure out.  But I decided to watch Monday’s match-up against the Bulls intently to see how they’d fare against one of the Eastern Conference’s better teams.  I even reheated the leftover turkey sausage for the occasion. 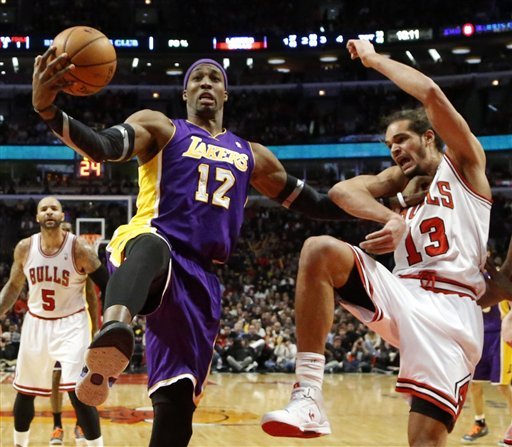 I wanted to see how Dwight (Pest’s new favorite player) would handle the formidable frontcourt of Joakim Noah and Carlos Boozer, whether Kobe Bryant would find his offense within the flow of the game and whether, after half a season under their belt, this Laker team had started to develop any sort of chemistry.

What I witnessed was a disturbing lack of intensity, characterized by very little pressure on the defensive end, particularly the perimeter (Bulls shot 53% from the arc) and an offense that wasn’t all that fluid.  In fact, their defense was so bad that they didn’t even send a Bull to the free throw line until the final minutes of the second half.  That tells me they’re not contesting shots.  D’Antoni shouting defense from the sidelines is a far cry from his team actually following his instructions.

I began second-guessing my decision to choose this side of the argument.

What this team needs to understand quickly, is that they are going to get everybody’s best every night simply based on whom they are.  Right now, they’re neither physically nor mentally equipped to handle that pressure.

Rational thought makes me wonder how this team can be so bad.  Eventually, my whole they-have-too-much-talent-not-to-make-the-playoffs will not hold water and I’ll have soon realized that the Pest merely baited me into this debate by raving about Dwight Howard one too many times.  There’s a sucker born every minute. 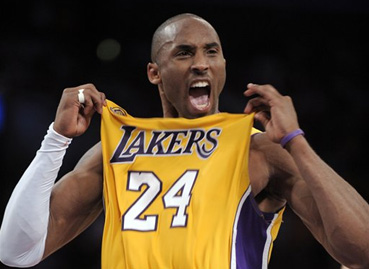 Yet, as poorly as L.A. played against Chicago and as disorganized as they were on both ends of the floor, they were still in the game until the end.  That’s why I think they’ll keep hanging around, finding a way to rattle off enough of a winning streak in the second half to position themselves as playoff contenders come season’s end.

I know that doesn’t sound very convincing and if you’ve seen any Laker basketball this season, it’s not.  But teams with that much talent don’t miss the playoffs in the NBA.  It just doesn’t happen.

Don’t go betting your life savings on it, just call it a hunch.  If I’m wrong, you can blame me later but if I’m right, and the Lakers make the playoffs, you can say you heard it here first.

43 thoughts on “The Los Angeles Lakers will, or will not, make the playoffs: A Full Court Pest/SportsChump debate”