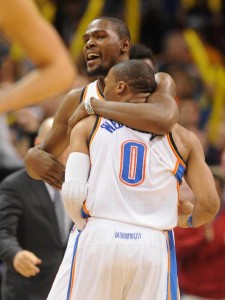 For years now, we’ve read about the on-again/off-again bro-mance between Kevin Durant and his teammate Russell Westbrook.  They’re the NBA’s most dynamic, fake-spectacled duo this side of Dwyane Wade and LeBron James.

We’re told they get along.  Then we hear they’re squabbling but when queried, they swear they’re the best of friends.

I used to believe them.  These days, I’m not so sure.

Behind the firepower of both Durant and Westbrook, the Oklahoma City Thunder proved they were for real by representing the Western Conference in last year’s NBA Finals.  They ultimately lost in five games to the Miami Heat.  In only six years, Kevin Durant has become one of the game’s most insane talents, ranking second only to LeBron James as the guy you’d least like to cover in a pick-up game.  Westbrook is equally as nasty.  He’s the most explosive point guard in a league full of explosive point guards, but he’s also an excitable boy.

His temper flared again the other night after a spat with one his teammates, allegedly either Durant or Thabo Sefolosha.  Only Westbrook knows for sure.  Westbrook stormed to the bench angrily, flipped a chair then ran to the locker room in a huff.  He later returned to the sidelines with a towel over his head, seemingly ready to apologize but we all know that would never happen.  Russell just doesn’t seem like the apologizing type.  Keep in mind, this all happened in a game the Thunder were winning by twenty!

TNT’s Craig Sager tried his best to get to the bottom of what happened but couldn’t get a straight answer from Westbrook, Durant or Coach Scotty Brooks.  They all brushed it off as Russell being Russell.  He’s a competitor, they excused.  Either way, Westbrook was an unhappy camper and millions of us saw it again, for the first time.

Now I’m not suggesting that locker rooms need to be all kumbaya for teams to win championships.  Sometimes a little fire is important but so is camaraderie and communication.  The next team to win a championship with one of their star players complaining about how few shots he takes will be the first.

Point guards aren’t always a team’s leader but they are the team’s quarterback.  They are, by nature, unselfish.  They’re the players who handle the ball the most, unless of course they’re on the same team as Kobe Bryant.  While OKC is clearly Durant’s team, Westbrook too often gives off the impression he’s uncomfortable playing second fiddle. 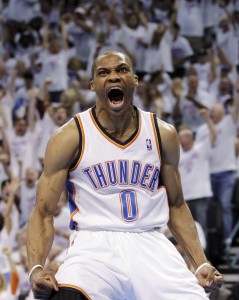 It’s easy to imagine Durant finishing his career in Oklahoma City.  While LeBron was airing his South Beach “Decision” years ago, Durant took the road less traveled, merely Tweeting that he had re-signed in Oklahoma City, without all the hoopla and rigmarole.

But Westbrook?  At this point, I think most of us would be surprised if Westbrook re-signs, or even makes it through his current contract.  Westbrook is locked in through 2016 at a max deal.  That summer, he’ll become an unrestricted free agent.

Durant/Westbrook wouldn’t be the first duo in NBA history to end on a sour note and they won’t be the last.  When players want to prove they can do things on their own, that usually ends badly for both the player and his former team.

All good things must come to an end.  If Westbrook can’t learn to play nice, that might soon be the case in Oklahoma City.

25 thoughts on “When egos collide: The inevitable downfall of Russell Westbrook”