To continue their proud tradition of ground-breaking journalism, ESPN the Magazine is coming out with its “Music Issue.”  For the photo shoots in said issue, the magazine encouraged athletes to dress up as famous musicians, such as Jimmie Johnson as Bob Dylan, NFL running backs Marshawn Lynch, Lamar Woodley and Trent Richardson as Run (get it?  Run?)-DMC and U.S. women’s soccer star Alex Morgan as Katy Perry.  God help us that Katy Perry’s musical contributions are even mentioned in the same breath as Bob Dylan’s.

Perhaps the most startling of the lot, however, was Tampa Bay Buccaneers’ quarterback Josh Freeman who, when dolled up, bore a striking resemblance to the King of Pop, Michael Jackson.

Considering this is the most press Josh Freeman’s ever received, other than the fact that the entire Tampa Bay fan base is still not convinced he’s their quarterback of the future, I thought I’d host a caption contest in his honor.

This one should be pretty easy, boys and girls.  The winner of this week’s caption contest will receive one sparkly glove, one rather dysfunctional family tree and one free trip to Neverland, room and board included.  Don’t stop ‘til you get enough. 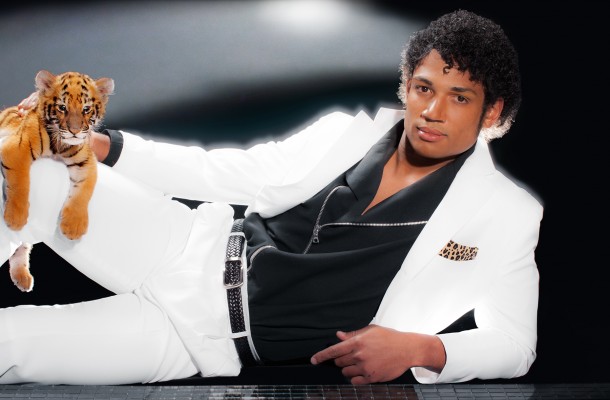