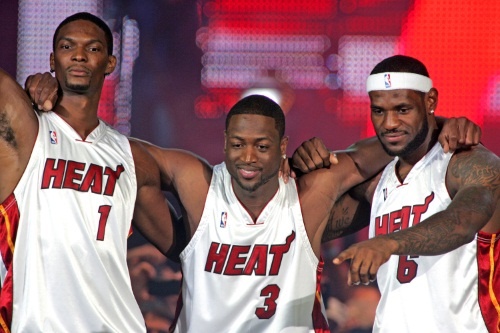 As you all know by now, I’ve already called this NBA season a rap.  Even though they can’t rebound, this Miami Heat basketball team is better, strong, faster and more together than any other team in the league.  We see evidence of that not only in their recent 13-game winning streak, but in the video below.

I found out only recently what the Harlem Shake is.  It’s a craze that’s taking over the nation.

Even though the Shake is actually a dance that dates back to 1980s Harlem, the newest trend for people with video cameras and imaginations everywhere (and I mean everywhere, just look on YouTube) is to put out videos with their own personal take on the dance.

Each video begins with one person in the room dancing while others remain calm… until the music pauses, then everyone on camera suddenly changes clothes and starts moving to the beat.

Miami’s take on the shake begins with the newly acquired Chris “Birdman” Andersen entering the locker room while the other members of the Miami Heat stretch.  That’s when the music stops and all hell breaks loose.  We then see King James shimmying in his oversized crown and cape, a ghetto blaster and cowboy hat-toting, Chris Bosh (he’s from Texas) dancing around in a bathrobe, a dookie-chained, Dwyane Wade complete with bright red suit and fuzzy bear head and many, many others.

I bet you can’t watch it only once.

The Heat aren’t the first team to release their version of the Harlem Shake nor will they be the last but a project like this tells us, and the rest of the league, just how relaxed this team is down the stretch and why they’re going to be very, very tough to beat in June.

32 thoughts on “The Miami Heat shake things up (video)”