Ladies and gentlemen, we have officially crowned a new champion.  The worst thing about it is, not only does he know more about college hoops than you, but he’s also probably a better golfer than you as well.

Our first round champion picked 11 out of the sweet 16 correctly, which is impressive considering the unpredictability of opening weekend.  In doing so, he edged out recent birthday boy and defending champion, Heavy D, by a single point, which are honors D will likely get back from him on the poker table sometime soon.

Without further ado, I proudly present your first round champion, recent newlywed and overall decent fella…. Zbignu, with a total of 39 points.  Oregon pushed him over the top by a smidge, which I guess means he’ll be wearing his green Nikes to work today.

Now on to our second round of the tournament and again, your prize, other than getting to stand proudly on the Olympic pedestal next to Zbignu, is your own personal copy of Bobby Knight’s “The Power of Negative Thinking.”

This round will run similar to last except I now need you to pick the winners of the next twelve games. 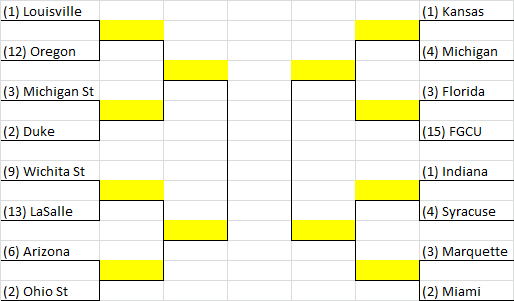 You must pick UP UNTO THE FINAL FOUR ONLY, which means correctly (or as correctly as possible) picking the winners of this weekend’s games, twelve total games and their projected outcomes.

A theoretical entry would look like Louisville over Oregon, Michigan State over Duke and Louisville over Duke for each of the four remaining divisions.  As in the first round, points will be awarded by seed for every correct pick.  Choose incorrectly and receive zero.  Incorrect or incomplete entries will be penalized.  As your tiebreaker, list the team that will score the most combined posts on their way to the Final Four.

Have I made myself clear?

Best of luck, ladies and gentlemen!  May your brackets be forever un-busted.