That’s right, ladies and gentlemen.  Pigs are flying high today because avid SportsChump reader, former fellow podcaster and overall stand-up guy, J-Dub has FINALLY won one of my contests.  What is it they say about broken clocks being right twice a day?

Dub edged us all out by garnering 27 points in this second round of college hoopsanity.  Picking the ninth-seeded Wichita State Shockers to reach the Final Four pushed him over the top, beating yours truly by the narrowest of margins.  As promised, he’ll be taking home Bobby Knight’s latest work The Power of Negative Thinking which I’m sure is a great read but probably nowhere near as good as the book Dub will write one day.

We now move on the Final Four portion of our pick ‘em contest and your last chance to win some bed-side reading with Bobby.

This round will go as follows.

With only four teams remaining, you must submit the winners of all three games: Michigan vs. Syracuse, Wichita State vs. Louisville and finally, the championship game.  I also need your prediction for how many points each of those teams will win by.

For example, a typical entry will look like this:

Louisville over Wichita State by 9

Syracuse over Michigan by 4

Louisville over Syracuse by 7

Here’s how this round will be scored so please pay close attention. 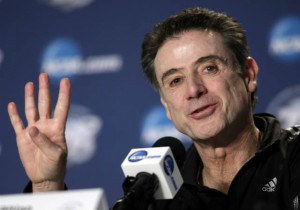 You will receive fifteen points for each of the first two games picked correctly, HOWEVER, one point will be subtracted for each point you miss the projected margin of victory by.  For example, if you pick Louisville to beat Wichita State by nine and they end up winning by 17, you will receive fifteen points for picking the game correctly but lose eight points by missing the margin of victory by eight, hence seven [15 minus 8] total points for that game.  If you pick Louisville to win by nine and Wichita State wins by three, you will win -12 [0 minus 12] points for that game.

You will receive twenty points for correctly picking the winner of the championship game with points once again subtracted for wrong scores.  The highest combined total points after the three games will win the final copy of Bobby Knight and bragging rights for the year.  Win the game with over 40 points and I might even throw in a t-shirt.

Break out those crystal balls one last time, readers.  Good luck and may the best guess win.

One of us really knows a lot about college hoops.  He won it last year, so this year I changed the format, you know, to kind of Tiger-proof the course.  It didn’t matter.  He still won.  Talk about versatility.

Thanks to all of those who participated in this year’s revised contest.  As always, feedback is welcome.