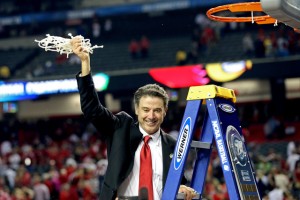 I try not to be reactionary in times like these but I’m waiting for someone to convince me that Rick Pitino is not one of the top five, Division I, men’s college basketball coaches of all-time.

I was having this very same conversation with friends the other night only hours after watching Rick Pitino cut down the nets for the second time in his career.  As you’ll see below, some interesting names were thrown into the conversation but when it was all said and done, nobody could convince me Pitino did not belong on that list.

Let us first establish a few parameters for this debate.  First and foremost, John Wooden is inarguably the greatest men’s college basketball coach of all-time.  His record at UCLA speaks for itself: ten titles in twelve years, an 88-game winning streak, seven consecutive national championships and a dynasty unlike any other, featuring two of the greatest big men to ever play the game, Lew Alcindor and Bill Walton.

Things get a little cloudy after that.  One can make a legitimate argument that Duke’s Mike Krzyzewski (four national championships, 13 Elite Eights, 957 coaching victories, built a Duke program out of nothing) is the second greatest coach of all-time.  One can also make that same argument for Adolph Rupp (four national championships, 876 career wins).  Whomever you put at two or three, it’s probably safe to put them both ahead of Pitino, although I would at least entertain the argument against Rupp.  After all, the college basketball landscape has changed dramatically since his all-white Kentucky teams dominated the late 40s and 50s.

Either way, that leaves us with only two spaces remaining, one of which I believe belongs to Pitino who, on Monday night, did something no man in the history of the sport has ever done: win a championship with two different programs.  Is he a better coach than Bobby Knight, who boasts three national championships and 902 career victories?  Is he better than Jim Boeheim with one national championship and 920 career wins?   How about Dean Smith, two titles and 879 career wins?  Or what about UConn’s recently retired Jim Calhoun who boasts 866 wins with three national titles over a twelve year span?

When you add these Hall of Fame coaches into the mix, things become a little hazy but in my mind, you have to give the nod to Pitino.  While Pitino has only 664 career wins in the college game, he took seven years off to coach in the NBA.  The 20 wins-per-season he would have earned over that time would put him in the 800-win club and at 60 years old, he’s the youngest of the bunch to be there.  And I still believe, the fact that he won championships with two storied, albeit troubled, programs cannot be overlooked. 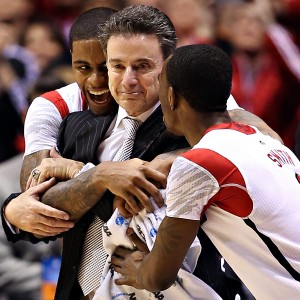 In 1989, Pitino took over a Kentucky team that had been placed on probation for illegally paying recruits.  The career move was a gamble.  Within three years, Pitino had the Wildcats back in the Final Four.  Within six, he had won a national championship.  After a second, brief hiatus in the NBA, this time with the Boston Celtics, Pitino took over a flailing Louisville program in 2001.  In his second year, he won twenty-five games.  Within four years, he was back in the Final Four.   He made the Final Four again last year, the sixth in his career, and this year, he capped off a 35-win season with another national championship.  And let’s not forget leading a Providence team nobody outside of Rhode Island had ever heard of to its second only Final Four.  They haven’t been back since.

Everyone has their allegiances but we have now seen Pitino either build, or rebuild, three separate programs, making contenders, if not champions, out of all of them.  That’s more than can be said of any of the other historic coaches on this list.

And that, my friends, has to count for something.

41 thoughts on “Is Rick Pitino one of the top five, college basketball coaches of all time? SportsChump lets you decide, sort of”