I heard a great point the other day.  I wish I could remember who brought it up first.  My apologies to whomever it was but please allow me to build upon that premise. 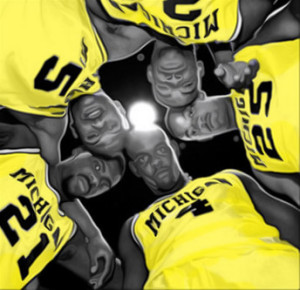 Last week, John Beilein coached his University of Michigan Wolverines all the way back to the championship game.  It marked the first time in twenty years the school had been there.  It also marked the twentieth anniversary of the time out heard ‘round the world.

The Fab Five of Jalen Rose, Chris Webber, Juwan Howard, Jimmy King and Ray Jackson had themselves quite a basketball team in the early 1990s.  They made it to back-to-back NCAA title games, winning neither of them, losing one to Duke and the other to North Carolina.

But they were a cultural phenomenon.  Three of the five (Rose, Webber and Howard) went on to have very respectable NBA careers.

All we heard prior to this year’s national championship game, two decades later, was whether the Fab Five would attend the game together, since some of them (mainly Webber) no longer speak to each other after the fallout that vacated those two title appearances.  On basically every ESPN broadcast known to man, Jalen Rose made a plea to Webber to put all that had happened behind them in an effort to support their school as they went against the favored Louisville Cardinals. 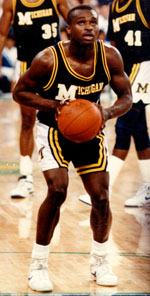 There was never, however, any coverage of the only Michigan team to actually win a national championship.  They are the forgotten ones.  Glen Rice, Rumeal Robinson. Loy Vaught, Terry Mills, Sean Higgins, what about those guys?  How come they didn’t have their fair share of face time?  After all, they’re the ones with the hardware.

I didn’t see a single interview with any of those guys, especially Rumeal Robinson whose two free throws at the end of that 1989 game were as clutch as you’ll ever see, yet CBS’s coverage was quick to capture the fashionable and far more, high-profile Webber as he exited his SUV.

Perhaps we should all take a time out (Sorry, C-Webb) and acknowledge the band of Wolverines that actually raised the trophy, the only ones to do so.  Or is that not what matters anymore?  How long ago did hype overtake heroics?

There is no denying that those they call the Fab Five changed the game of college basketball.  But did they end up winning it all?  No.  And for that reason, the Michigan team that did deserves a little more respect… and a lot more attention.

26 thoughts on “When winning isn’t everything: Wherefore art thou, the real Fab Five?”