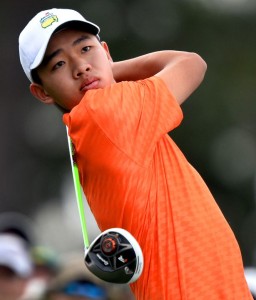 Rules are rules and without them, there is anarchy.  I get that.

But sometimes, just sometimes, the rules can be bent, allowing for a little leniency.  Last weekend at Augusta was one of those times.

For those of you not in tune with the tradition unlike any other, a 14-year-old kid from China named Tianlang Guan made his Masters debut.  He was the youngest person to ever qualify, and more impressively make the cut, in golf’s most prestigious event.  He dropped a cool 73 and 75 his opening rounds on the world’s most grueling course.

Guan actually would have scored a 74 on Friday, and not the 75 he turned in on his scorecard, had he not been penalized a stroke for slow play.

The slow play rule is in place for a reason.  Anyone who has ever played golf with a lumbering foursome one group ahead understands exactly why.  Rules governing pace of play were established to ensure rounds are completed in time, particularly on tour.  However, if I told you that the powers-that-be at Augusta penalized an eighth grader for taking a little too long to hit his golf ball, you’d probably look at me in amazement.  A stroke, mind you, that almost cost him the cut, which is a far stricter penalty than having to write one’s name on the blackboard 100 times after school.

Here’s what some of the pundits said about the penalty.

Paul Azinger, ESPN.com TV analyst: I saw players take a minute and a half deciding what to hit into No. 16 today. And for him to get a time for going over 50 seconds twice, to get a penalty, is a joke, especially in today’s conditions. The official who gave him the penalty should have been a little more discerning in that. Very, very, very unfair.

Farrell Evans, ESPN.com senior golf writer: Guan was warned several times to speed up his play. The rules are the rules. This is the big leagues. On Friday, he should have learned a very important lesson about competing at the elite level. Golf shots are just one aspect of this business.

Bob Harig, ESPN.com senior golf writer: A tough call. Not when there’s never been a stroke penalty given in Masters history, and not when the entire round was played in extreme conditions and groups were taking more than five hours.

Gene Wojciechowski, ESPN.com senior national columnist: You needed a sun dial to time the pace of play during Friday’s rounds for lots of groups. Maybe Guan violated the letter of the law, but I’m not sure he violated the spirit of it. The penalty seemed, under the circumstances, unnecessary and borderline heartless. 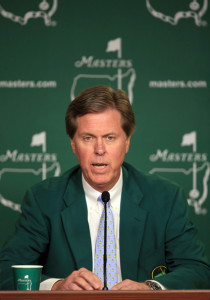 I get that this is the Masters, golf’s biggest of all stages, but why single out Guan when no one else was penalized for similar indiscretions?  To teach the kid a lesson?  Guan’s unflappable success was one of the tournament’s best stories.  The penalty made Augusta look petty, particularly considering he was the first player ever penalized for slow play.

Here was what Masters Competition Committee Chairman Fred Ridley said with regards to the penalty:

“Guan was assessed a one-shot penalty for violation of Rule 6-7 of the Rules of Golf and the Tournament’s Pace of Play Policy.  His group, which included Ben Crenshaw and Matteo Manassero, was deemed out of position on No. 10. Guan began being timed on Hole 12 and received his first warning on Hole 13 after his second shot. In keeping with the applicable rules, he was penalized following his 2nd shot on the 17th hole when he again exceeded the 40 second time limit by a considerable margin.”

Herr Ridley must be a real hoot at dinner parties.  Just call if you’re going to be late.

So what’s the moral of the story here?  What are we to learn from all this?  Golf is a game of rules and etiquette.  They’re strict some times.  That’s what turns so many people off to the game.

Here’s hoping Guan heads back home with positive memories of his experience in Augusta and not wondering why some stuffy, old, white guys decided to dock him a stroke for standing over his golf ball a few seconds too long.