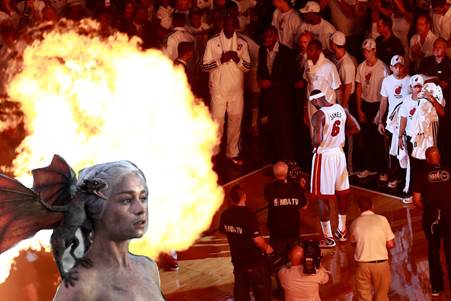 For LeBron James, it’s revenge six years in the making. For the San Antonio Spurs, it’s about their chase for championship perfection. After years when House Lannister (Los Angeles Lakers) and House Baratheon (Boston Celtics) ruled the NBA landscape, we finally get the match-up for the ages, a true clash of the old and new kings— the Spurs versus the Miami Heat.

In 2007, the Cleveland Cavaliers led by LeBron faced the San Antonio Spurs in the NBA Finals and got butchered a la Stannis Baratheon’s fleet in the Battle of the Blackwater. Can we expect more of the same when the Spurs once again take on a James-led squad in 2013? Most probably not, you can bet half the gold of the Lannisters that this NBA Finals won’t be another massacre and the odds (old and the new) will be in your favor.

After all James has now with a new army after selling his soul to the devil (Read: teaming-up with All Stars rather than sticking with the Cavs), the reigning King gets his second shot at the Spurs and aims for his second crown in the last three years.

If you do NOT want Game of Thrones series spoilers, take this as your final warning. Stop and go away, do not be like Robb Stark who got killed by his recklessness and indiscretion in the penultimate episode of GOT’s 3rd season. (whoops.)

Below are some of the reasons why you should enjoy the Game of NBA Thrones this year. Ice (San Antonio Spurs) and Fire (Miami Heat) do not go well together— that only that we’ll have one hell of a championship series ahead.

Reason #1: The Rise of the King

Over the past few years, “King James” has risen from the ranks— from a star rookie to now being considered as one of the elite players all-time because of his great and sometimes superhuman performances in the regular season and especially the NBA Playoffs.

Clearly, the King has arrived. It’s only a matter of time when he rules the entire Seven Kingdoms. Probably he’s thinking of chasing the G.O.A.T. throne too: Michael Jordan has six championships and LeBron has many more to win before he can reach that level of greatness and lore.

Think of LBJ as Daenerys Targaryen. He has already found his army (he started with nothing with the Cleveland Cavaliers some years back) and he’s adding more. Like Khaleesi, he has slowly built up his reputation and accumulated a lot of accomplishments in such a short span of time thanks to a vicious streak.

While many cities have fallen, the army grows thanks to new supporters (Khal Drogo, the Dothraki, Astapor, The Unsullied and Yunkai). Although young, the world has thrown accolades and jewels at LeBron as his claim to the thrown has thrived: 4-time MVP, 1-time Finals MVP, 1-time NBA Championship. Both Khaellesi and LeBron are not quite done yet: she wants to rule the entire Seven Kingdoms and he wants to change NBA history and become the greatest king of all time.

Here’s the King (literally) rising to the occasion against the Pacers:

And here’s the Queen stepping up her game:

And in this season finale called the NBA Finals, Daenerys (LeBron) needs her dragons (LeBronettes) even more than ever if they want to defend their crown.

Head coach Erik Spoelstra is easily Jorah Mormont. Although there is quite an age difference—Spo is in his early 40s and relatively a fresh face in the coaching scene while Sir Mormont is probably in his mid-50s and a long-time lord— both are tasked to help out and advise their respective king/queen. Spo is a good players’ coach and has maximized LeBron’s potential, even putting LeBron at the Power Forward spot and using small ball, which has done wonders for this Heat squad in the past two years. Jorah meanwhile advises Daenerys in a lot of things—including which cities to sack and which people to trust.

A “Golden Crown” was what Mr. Gilbert got after “The Decision” of LeBron.

And who then is Khal Drogo? He’s got to be Pat Riley. Khal Drogo is dead now as Riley is not the head coach anymore– but what they have done in the past for Khaleesi/LeBron means a lot for the future of both. Khal Drogo provided the soldiers and started Daenerys transformation from a meek girl to a full-grown leader; Riley gave LeBron the keys to the future of the Heat and along with it his own potent army that can challenge for the crown year-in and year-out.

Once upon a time, the Spurs were notoriously known as the “most boring team” in the entire NBA. And curiously, this was despite the fact that they were winning championships left and right from the lockout season of 1999 up until 2007 (went 4-of-4 in the NBA Finals in four appearances in that stretch). The Texas team has had the reputation of being a monotonous, dull and uninteresting basketball team in those years mainly because they used defense as their primary weapon in winning their battles (the most unpopular one: Detroit vs. San Antonio in the 2005 Finals). And really you can’t blame the fans:

Not today says Arya Stark. Not today. The new age running and gunning San Antonio Spurs averaged 102.9 markers per game or 4th overall in scoring in the entire league this season. Not bad for old guys, huh?

So which GOT characters have shown that they can remain effective despite the reinvention of roles and redefinition of their identities?

Clearly, the Spurs are the Starks in this respect. Be it a defensive slow-it-down affair or a high-scoring game, the Spurs have adjusted to the times and are the rulers that have outlasted entire kingdoms. Just like the Starks are able to adjust to the situation at Winterfell—the Spurs have seen the NBA change, the styles and stars change, but have resisted the urge to shift from their pledge to be consistent.

First, let’s get to the obvious ones: the House Stark sigil is a gray direwolf on a white field. Good enough, Spurs’ jerseys are colored black-gray. House Stark motto is “Winter is Coming”. Again, good enough, as winter here can be pertaining to the Spurs’ age particularly Tim Duncan and Manu Ginobili.

Much like the Spurs’ identity of “playing the game the right way” over the years, House Stark is also known for their honor, integrity and righteousness costing some of them their own lives—yes, stupid but admirable.

Remember earlier this season when they cut the volatile Stephen Jackson from the roster? They could have used him in the playoffs, right? Guard the likes of Klay Thompson and in this NBA Finals, LeBron James and Dwyane Wade? But no, the Spurs released S-Jax as he was becoming a distraction to the team and the franchise decided to risk it just to stay true to their identity. If Ned Stark was the General Manager of Winterfell DireWolves, he would have cut S-Jax too.

Yes people, call the Spurs team dull and boring, but they stick to their principles: be a distraction/deserter and heads will roll.

When you are talking about people from the North, you always begin with Lord Eddard Stark. And when it’s about the Spurs, you start with Tim Duncan. First, let’s get the differences out of the way. Ned got his head cut off in his first and only season with GOT; Timmy meanwhile, appeared in his first NBA season in 1998 and has been reigning the Spurs kingdom for 16 years now! However, both have similar stark traits that simply make them unforgettable characters in the respective roles they have played in Winterfell and Texas.

Both are unquestioned and respected leaders and both are forever etched in history as the two greatest players to play (the Game of Thrones and in the NBA). Both are also unassuming yet very, very effective—what they do today is not only for the present but for the values they want to establish in the future. And oh, lest we forget they are cold-blooded killers too, as long as it’s the good of their people.

You’ve seen Ned kill a deserter in the video above and here’s the Big Fundamental killing the Phoenix Suns some years back:

Rob Stark is Tony Parker – Rob is the heir to Winterfell after Ned died as TP is the next in line to run San Antonio after Duncan retires. The question you have to ask yourself is that these Finals will be the Red Wedding for this Tim Duncan team.

Arya Stark is Kawhi Leonard/Danny Green – Arya could be playing with a rookie-scale contract and she’ll still want to make a mark in the Seven Kingdoms. Kawhi/Danny earns a roughly $5.3M combined—bargain in the NBA standard. Much like Arya’s true value to the Starks…

Hodor is Matt Bonner – Do NOT underestimate them and don’t try and understand why they are so important, they just are.

Jon Snow is Manu Ginobili – “That bastard” is something you’d say every time you see Manu flop:

“That bastard” is something you’d say every time you see this:

The NBA Finals will be a true clash of great kings and even greater kingdoms. A battle between an old empire (literal and otherwise) and a new dynasty, the reigning rulers who want to protect the crown and rule the NBA landscape for years to come.

Valar Morghulis, Valar Dohaeris. Who dies, who serves in the championship series will be decided in the next couple of weeks.