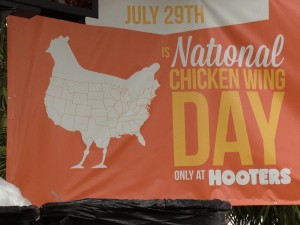 In America, we eat to excess.  It’s our birthright.

Don’t get me wrong.  I like to be gluttonous every now and then, indulging myself with the quarterly visit to a Brazilian steakhouse perhaps, but I’m not going to sit at a dinner table and see how many chicken wings I can eat in a ten-minute span.  It’s just not how I choose to enjoy a meal.  I did that once with Krystal burgers in college and my intestinal lining is still paying the price.

Others, however, have chosen different career paths.  Take Joey Chestnut for example, the world’s most famous eater.  He throws back hot dogs, Matzoh balls, gyros, asparagus, pork ribs and yes, chicken wings at a record pace.  At this year’s Nathan’s eat-off, he crammed 69 hot dogs into his pie hole in ten minutes flat.  He polished off 78 Matzoh Balls in eight minutes in one contest and 22 ¼ gyros in ten minutes in another.  Are you hungry yet?

When I heard that Mr. Chestnut and his merry band of gluttons were going to be invading a local Hooters to compete in an eat-off for the ages, how could I resist the gruesome display of blood, sweat and wings that was to come? 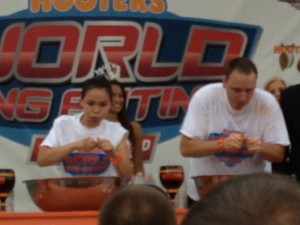 This is how bad things have gotten in this country.  Forget crime, racism and poverty.  Forget the health care crisis or our national recession.  I told a friend I was going to see Joey Chestnut for a potential SportsChump piece and I didn’t need to explain who he was.  She had already heard of him.  It was as if I was going to see LeBron James or Derek Jeter or Tom Cruise.  It’s a sad, sad day when eating makes you famous.

With that said, if competitive eating is truly a detriment to society, consider me a contributor.  This contest was something I had to see.

After a late lunch with mom at PF Chang’s, chicken wings not included, I traversed the Courtney Campbell Causeway through rain and rush hour traffic toward my destination.  Finding the nation’s original Hooters was easy.  I just followed the smell of buffalo sauce and artery hardening.

The place was mobbed.  Hundreds of fans gathered, holding in both hands the warm draft beer they had just purchased from the Budweiser truck.  Forget the stroller, Marge, fetch me another Bud Light.  We got wing-eaters to watch!  With live music playing in the background, this was your typical, parking lot Florida funk fest: flip-flops, beach balls and women wearing clothes two sizes too small.  Even Jon Gruden made an appearance.  If I’m not mistaken, I believe he actually worked at that very same Hooters as a teenager so there’s hope for you yet, young fry cook. 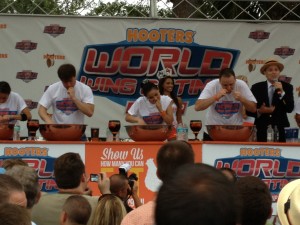 Sixteen competitors graced the stage that evening.  My stomach rumbled at the thought of what was to come.

The straw-hatted emcee and self-proclaimed chairman of major league eating, George Shea, kept the crowd involved, stealing the show with his one-liners.  “Welcome the greatest eaters in the world!!!” Shea shouted, as he introduced the next circus freak to the stage, some of them over 300 lbs.  The contest’s main attraction, Joey Chestnut, received more applause than the man who ranks fifth all-time in home runs ever will again.  With competitive eating growing in popularity and nary a failed drug test to be found, perhaps we’re on the verge of a new national pastime.  The sport’s logo could be an ever-expanding waistline.

Aside from the distinction of becoming the 2013 Hooters Wing Eating Champion (as if that’s not honor enough), the contestant who ate the most wings that afternoon would receive a check for $6,000.  That buys a lot of Tums.

Other contestants included the Black Widow Sonya Thomas, all 98 pounds of her, and hot newcomer Miki Sudo.  I say hot because she’s actually attractive, if you can look past the buffalo sauce that’s smeared all over her face.  Imagine finding someone you thought was a nice girl.  You ask her out to dinner and find out she eats for a living.  I hope you have some extra room on that credit card.  The same goes for you girls.  You finally meet a decent guy.  He asks you out to dinner and then proceeds to shove fifty meatballs down his throat.  Ah, to be young, hungry and in love in America. 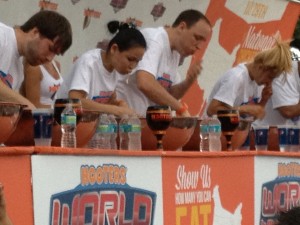 The clock sounded and the eaters were off.  I’m not gonna lie.  Things got gross.  Each contestant had to eat as many chicken wings as were placed in the giant stainless steel bowl in front of them.  Each eater had their own technique.  Water here, Gatorade there, carefully timed to wash down the pounds of carcass they were shoving down their throats.  Meat left on the bone counted against in the final weighing.

The clock finally expired after a nauseating ten minutes of wing chewing and sauce spewing.  Every contestant had the unmistakable look of regret on their faces, both their consciences and their stomachs berating them for participating in a contest that should never exist in the first place.  Wing sauce covered them all.

The bowls were taken off stage and weighed, not by the handler of Ryan Braun’s urine sample to ensure accuracy.  Chants of “Atta Boy, Joey!” pierced the crowd after Joey Chestnut was announced champion… 177 chicken wings later.  I wonder if those shouting his name felt in any way bad for doing so.

In the end, I’m not sure what lesson is to be learned here from all this.  Somewhere along the line in this country’s history, when the first person suggested holding eating competitions, the others around with any sense of decency should have overruled him.  We’re a nation that struggles with both hunger and obesity yet we have competitive eat-offs.  I pity the child in the audience who told his parents on the ride home that he wants to be grow up to be a competitive eater or the parents that think that’s a good idea.  Was there anyone else out there who thought that eating as many chicken wings as humanly possible in ten minutes time probably isn’t the most philanthropic of gestures?

I guess not.  Now if you’ll excuse me, I have to make myself something to eat.