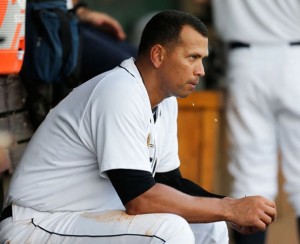 I’m about to say something utterly ridiculous.

I am currently rooting for Alex Rodriguez.

I know this goes against pretty much anything I’ve ever written and probably against the sentiment of 95% of the baseball fans out there, but just hear me out.

What’s different about A-Rod, however, is that he has made more money than anyone who has ever played the game.  By the time his current contract is up, assuming the New York Yankees are obliged to honor it, Alex Rodriguez will have made $355 million dollars, just in salary, over his career.  That’s almost enough to buy the Tampa Bay Rays.

A nineteen year vet, Alex Rodriguez just turned 38 years old and is finishing up a rehab stint with the Trenton Thunder.  He has yet to play in the majors this season.  According to some reports, he may never play again as he is the biggest name linked to the Biogenesis scandal about which we’ve heard a lot of rumor but very little detail.

All we’ve been told is that Major League Baseball has their watchdog investigators, an untrustworthy group in their own right, getting to the bottom of things.  We’ve heard about potential plea bargains from alleged violators and that names will be named this week, while the rest of us who still give a damn skeptically await the outcome.

A-Rod’s name will most likely be mentioned.  Most fans probably hope that it is.  But A-Rod is fighting this one tooth and nail, or as one announcer appropriately put it, staving off that third strike. 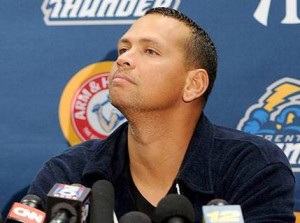 In a recent post-game press conference, A-Rod told the media “there is more than one party that benefits from me not ever stepping back on the field. That’s not my teammates and that’s not the Yankee fans.”   We can only assume he’s talking about the Yankees organization itself.  Or perhaps Major League Baseball.  Or even Cooperstown.  In essence, who, other than A-Rod and the limited sponsors he has left, would benefit from him playing again?  His lifetime ban would close a chapter on a sordid two decades of snitching, syringes and cynicism.

Now I’m not sure if A-Rod is lying through his teeth with that statement.  Telling the truth isn’t exactly his forte.  Maybe he’s receiving really bad (or really good) advice from the cut men in his corner but either way, I can tell you this.

If A-Rod takes the fall, the proverbial shit will hit the fan and it will stink worse than ever before.  If he, willingly or unwillingly, becomes the fall guy and is given a lifetime ban from the sport, he’ll come cleaner than Jose Canseco did in Juiced.  He’ll sing louder than Henry Hill at the end of Goodfellas and you know what?  At least that would put an end to this mess.

Think about it.  Major League Baseball bans Alex Rodriguez for life.  The Players Union throws him under the bus, making him baseball’s ultimate sacrificial lamb.  The New York Yankees void the remainder of his contract.  What else does A-Rod have to lose other than to tell every explicit detail of who took what, when and where?  At least we’ll be one step closer to the closure the sport so desperately needs. 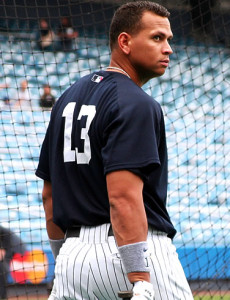 So at this point, even though we’ve despised him in the past for simply doing what everyone else in the sport was doing but better (except in the post-season – gratuitous dig), why wouldn’t we want A-Rod to become the sports’ last martyr, particularly if he’s willing to accept that role?

We want the truth and we can damn well handle it.  So I say, you GO, A-Rod!  Accept the lifetime ban and sing like a canary.  Tweet, tweet, mon frère.  Your conscience will thank you in the morning.

I heard a Jay Mohr interview with Pete Rose the other afternoon.  Mohr asked Rose whether Hall of Fame induction was important to him.  Clearly apologetic for the lies he told for so long, Rose answered no, self-confident that his contribution to the game was worthy enough.   Make no mistake, steroids or not, Alex Rodriguez was a damn good baseball player, perhaps the most dominant hitting infielder we’ve ever seen.  If his lifetime ban is what it takes to finally set the record straight, and he’s willing to accept that role, then that should be all the vindication A-Rod needs.

And that is finally something worth rooting for.