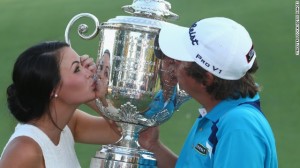 Very few men have ever won a PGA Championship.

Even fewer have grabbed their wife’s ass for millions to see immediately after doing so.  Suddenly, Jason Dufner has become my new favorite golfer.

Dufner along with Keegan Bradley, Webb Simpson and Bubba Watson have now all won major championships, meaning the future of American golf is in good hands.  So, apparently, is the rear end of Jason Dufner’s wife.

After shooting a final round 68, and an even more impressive second round 63, Dufner coasted to victory at Oak Hill Country Club this weekend.  The characteristically stoic Dufner showed little emotion after sinking his final putt and capping off what had to be the highlight of his career: winning the season’s final major.  While others laugh, cry and embrace their loved ones after such a moment, Dufner’s celebration was as steady as his golf game.

That was until his wife greeted him on the 18th green.  Dufner’s response?  A nice, firm pat on the rear end.  You can take the kid out of Alabama.

So to honor Jason Dufner’s first major championship and his wife’s perfectly round derriere, I thought I’d host a little caption contest in their honor.  The winner of this week’s caption contest will receive one golf lesson from yours truly (non-refundable) and a complimentary pat on the rear after said lesson is over.* 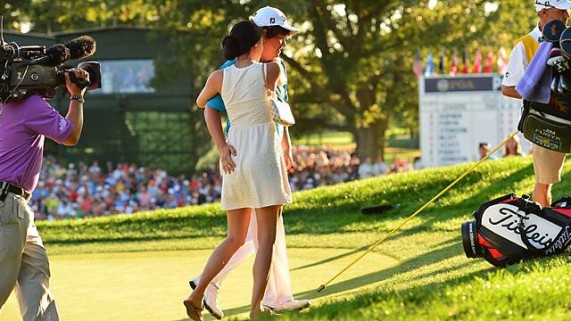