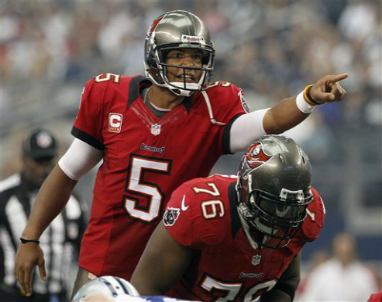 Last Sunday afternoon, Geno Smith started his very first game as quarterback for the New York Jets.  On the Buccaneers’ side of the football, Josh Freeman started his 57th.

Smith, a second round draft pick, is considered one potential future for the Jets, or at least more so than Mark Sanchez.  Josh Freeman’s future in Tampa Bay is far less certain.

Freeman entered this season more dead man walking than any other quarterback in the league, ironically except for perhaps Sanchez.  Freeman is in a contract year and the Bucs have made no indication that he is their long term solution.  If anything, they’ve made remarks to the contrary.  They even drafted his potential successor, current backup Mike Glennon, in the third round last year so Freeman could hear that uncomfortable breathing down his neck.

Most fans in the area consider Glennon’s coup d’etat a foregone conclusion, the sooner the better for all the Freeman haters residing in the Bay Area, of which there are plenty.  One local radio station is even holding a contest awarding callers for predicting which week Freeman will surrender his starting spot.

On a Sunday when the Buccaneers should have won a game they didn’t, one can make the argument that the rookie Smith (24-38, 256 yds, 1 TD) outplayed Freeman (15-31, 210 yds, 1 TD).  In a back and forth game, Freeman was seconds away from leaving East Rutherford with his 11th career fourth-quarter comeback.  Instead, Smith got his first. 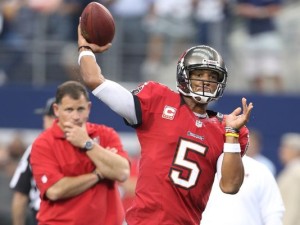 But Freeman was not the reason the Bucs lost.  Well, not entirely.

Either way you slice it, the Buccaneers start the season 0-1, yet another burden for Freeman to carry.

But someone has to take a fall for a sub-par season and Freeman is the likeliest of candidates.  He has fifteen more games to prove he can lead this team.  While he’s attempting to do so, the Glazer family will watch him very, very carefully.  After all, they’re the ones having to write that fifty million dollar check.  That’s the going rate for AVERAGE starting quarterbacks these days.  Faces of the franchise go for considerably more.

Here’s the worst case scenario for the Buccaneers.  The Bucs go 7-9, 8-8 or maybe even contend for a playoff spot (unlikely but still possible).  Or let’s say the Buccaneers finish worse than that but it’s not Freeman’s fault.  He has what boils down to be a nondescript season.  He doesn’t play great but he plays well enough to put his team in a position to win, as he did last Sunday.  The season ends.  The Glazers must then decide whether he’s their guy, whether to sign him or whether to cut ties, if they haven’t secretly done so already. 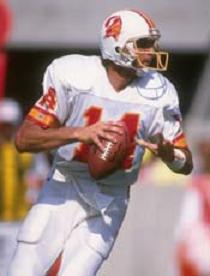 The Buccaneers have never really had a franchise quarterback, which is amazing considering they’ve been around for almost forty years.  Vinny Testaverde is Tampa’s all-time passing leader with 14,820 yards.  That came in over six seasons.  New Orleans Saints’ quarterback Drew Brees has that many in his last three.

What this tells us is that the Buccaneers are desperate for a quarterback to build their franchise around and they still don’t know whether Freeman is that guy.  Cut him and start from scratch.  Keep him and take your chances.  These are decisions the Glazers will soon have to make and I don’t envy them for it.

24 thoughts on “Not so fast, my friend: The death knell for Josh Freeman stops momentarily in Week One, or so we think”