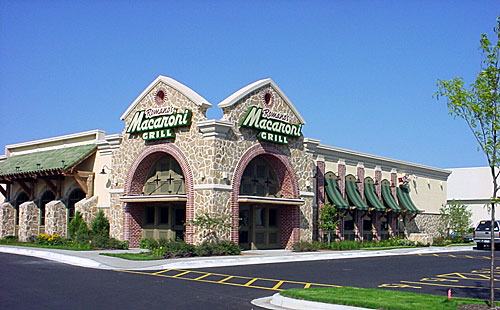 My morning started out like any other.  A late night karaoke-fest followed up by a solid night’s sleep, then another nap after moving from bed to sofa.  The Chump likes to be well-rested before starting his day.

Responsibility-free until the weekend full of drink-slinging and entertaining, I have learned to cherish my Thursdays off.  This summer, I even established a new Thursday, pre-golf ritual: a late lunch at Romano’s (with their half-off bottles of wine) accompanied by a scrumptious chicken piccata, with no butter sauce to ensure my ensuing round of golf would not be interrupted by repeated visits to the men’s room.

This particular lunch, however, was different than most.  Upon entering the restaurant, I encountered a short-haired, olive-skinned, way too slender female sitting by herself out front.  Kind of odd-looking, I noticed she had a notebook and pen in her lap.  I could only assume she was as kooky as I since I also carry a pad and pen when dining alone, scribbling notes feverishly as the need arises.

Halfway through my piccata and pinot, I saw the woman enter the restaurant and step to the only other occupied table in the place, where two older ladies sat having lunch.  Out of the blue, the notebook-toter burst into song as if she had just penned an opera she wanted to try out for the crowd.  Her voice boomed impressively through the restaurant while the servers carried on as if nothing out of the ordinary was happening.  I had never seen this woman before and I had been there at least six times this summer.  Certainly this would bode for a magical round of golf.  If only the afternoon rain would stay away.

I paid for my tab after over-tipping, confident Bocelli was on my side. 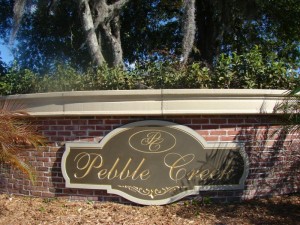 I hustled off to my local course of choice, Pebble Creek, where one can play all the afternoon golf one wants for $15.  On the short drive over, I heard the Buccaneers had sold out the Saints game, their first Sunday home game televised in years.  I contacted my buddy within the organization and congratulated him on a job well done.  I emailed him the “Always Be Closing” clip of Alec Baldwin in Glengarry Glen Ross then watched it all the way through before teeing off.

Game face on!  With Bocelli and Baldwin on my side, today would most certainly be the day I shot an 88.  I wouldn’t take no for an answer.  After all, golfing is for closers.

Double Jack and Coke in hand, a big glass of water to hydrate and a cigar to get me through the round, I approached the first tee confidently.  I proceeded to double-bogie the first hole.  Not a problem.  I would just have to shake it off with a few pars, which I did on two and three.  Back on pace, only two over after three.

The fourth hole at Pebble Creek is unforgiving.  Water all along the left side, woods to the right, one must drive it down the middle of the fairway to have a look at the elevated green up and to the right, which one must carry another creek to reach.  I didn’t.  The fourth hole was my worst of the day.  A poorly hit, nine-iron put my ball in the drink leaving me with an eight, the dreaded snowman.  So much for classical music and sales pitches serving as pre-golf inspiration.

I was five over after four holes but I would not let that get me down.  A bogey, bogey, triple, bogey and bogey to finish the front left me with an unenviable 47.  My goal to shoot in the 80s was nearly out of reach. 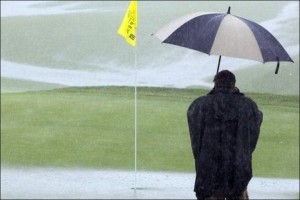 Appropriately, the sky grew cloudier, the weather nearly as bad as my golf game.  I’d be lucky to finish the round, which was probably a good thing.

I stepped back into the clubhouse to cool off, grab a refresher cocktail and set my mind right.  I’d need a solid back to even sniff an 88.  A double-bogey on the tenth hole was no way to start but a par on 11 was.  A double on 12 and a triple on 13 had all but sealed my fate.  At this point, I could only pray for rain.  There was no earthly way I could shoot in the 80s unless…

Wait a minute, I could do this!  If I could just par the remaining holes or even squeak out a birdie, my goal was still within reach.  The par five 17th is one of the easiest holes on the course, certainly birdie-able.  If I could just par 16 and 18 as well, I’d have my 88.

That’s when the rain came.  It looks like I had prayed too hard.  Lightning and thunder decorated the sky, enough to send even the most daring golfer back to the clubhouse for shelter.

But I waited.  And waited.

I sat under a tree along the right side of the fairway, waiting for the rain to pass.

I didn’t think the heavy stuff would come down for quite a while.  The good Lord would never disrupt the best game of my life.

Alas, he did.  The weather got worse.  The fairway became drenched, the conditions increasingly unplayable.  There was no way I could hit the ball clean off a water-soaked fairway.  Had there been a horn on the golf course, it would have sounded long ago.

I packed it in and called it a day, the rain washing away any chance at a personal best or at least that’s what I tell myself.  Rat farts.  My quest for 88 would have to wait.

Until next Thursday.  When I’ll try it again.

27 thoughts on “SportsChump and the eternal quest for 88”