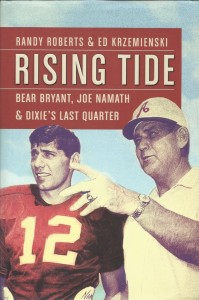 Not much has changed in the last fifty years.  College recruiting is still a cutthroat business, race relations in this country are still strained and Alabama is still the best football team in the nation.

With that said, in Rising Tide: Bear Bryant, Joe Namath and Dixie’s Last Quarter, Randy Roberts and Ed Krzemienski load us into their time machine by painting a vivid picture of high-stakes college football and racial disharmony in the South in the 1950s and 60s.

Their story begins with the tale of Howard Schnellenberger (yes, THAT Howard Schnellenberger) as he is sent up to Pennsylvania with one very important objective: bring Joe Namath back to Alabama.  Negotiations between the University of Maryland and the nation’s hottest, high school prospect had broken down.  The year was 1961.

Growing up in Western, Pennsylvania, a young Namath didn’t want to work in the steel mills like his father, grandfather and nearly every other male immigrant who had settled in that part of the nation.  “Working in a steel mill provided a good life for a man and his family, but not an easy one.  Few who went into the mill ever came out.  It was a lifetime commitment.”  Football, for Namath, became that way out.  He most certainly had the talent for it.

After tracing Namath’s high school career on the football field, and equally memorable trouble-making antics off it, the book follows Namath on his recruiting trips to Notre Dame (“where are all the girls?”), Minnesota (“snow blindness”) and the University of Miami where he enjoyed the “round the clock party.”  Several other schools wooed Namath including Michigan State, Arizona State, Iowa and of course Maryland where he probably would have enrolled had he not missed qualifying eligibly on his SAT… by three points. 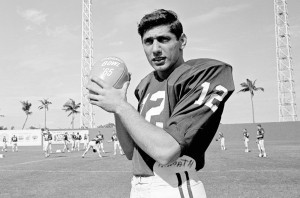 Upon landing in Tuscaloosa, Namath had trouble adjusting to the South despite his early success.  Namath was of Hungarian descent.  “He was one of the wretched refuse.  His family had washed onto Ellis Island sometime at or near the turn of the century, and now he had washed into the Southeastern Conference.  Joe did not look, speak or behave like Bryant’s other boys, and it was not just because he was a northerner.  Joe Namath was just different.”

Even though his head coach and football legend Bear Bryant recognized Namath’s greatness, Bryant was no coddler, repeatedly pulling Namath from games after poor performances.  No starting spots were granted based on notoriety.  The authors give us a convincing glimpse of what it was like to be coached by the Bear himself.  Bryant “had a gaze that was difficult to meet, the kind of penetrating intensity that made a man afraid to look into his eyes directly because it might be interpreted as a challenge, and fearful to look away because it might be taken as a lack of resolve.  There was nothing about Coach Bryant that breathed a trace of softness or suggested he couldn’t kick the ass of any man within hollering distance.”

Although Namath and Bryant shared a common goal, the two couldn’t have been more different. “Bryant exuded the hard-edged confidence of a battle-hardened World War II general.  Namath oozed a different sort of confidence.  It was less uptight, the smiling confidence of a new generation coming of age.” 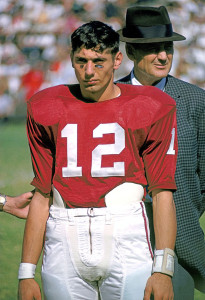 Their unlikely union came at a pivotal time in our nation’s history.  Integration in the South occurred at a snail’s pace with tremendous, and quite often violent, resistance; racial strife became the backdrop for the era and a troublesome topic for Bryant and his football program.

Tensions escalated when a top-ranked, and all-white, Alabama team was invited to play against an integrated UCLA team in the 1962 Rose Bowl.  Rumors swirled that fans planned to boycott the game were Alabama to accept the invite.  They didn’t, opting to play Arkansas in the Sugar Bowl, which they won.  “Alabama won the national championship in 1961 without competing in a single integrated contest.”  They did so again Namath’s senior year.  One sports writer called them Alabama’s “Front-of-the-Bus” championships.  The authors remind us Namath’s title would be “the last time it would happen, though no one knew it then.  To many it was a clear sign of the desperately slow pace of change in America.”

Hard to imagine this was only fifty years ago… or is it?

Sure, college football has changed since then.  One would expect nothing less.  Although with all the SEC coaches and quarterbacks making headlines and trading verbal jabs in recent years, Rising Tide is a hospitable reminder that same hoopla began long ago by two men in a far more controversial time.

Their names were Bear and Joe Willie.