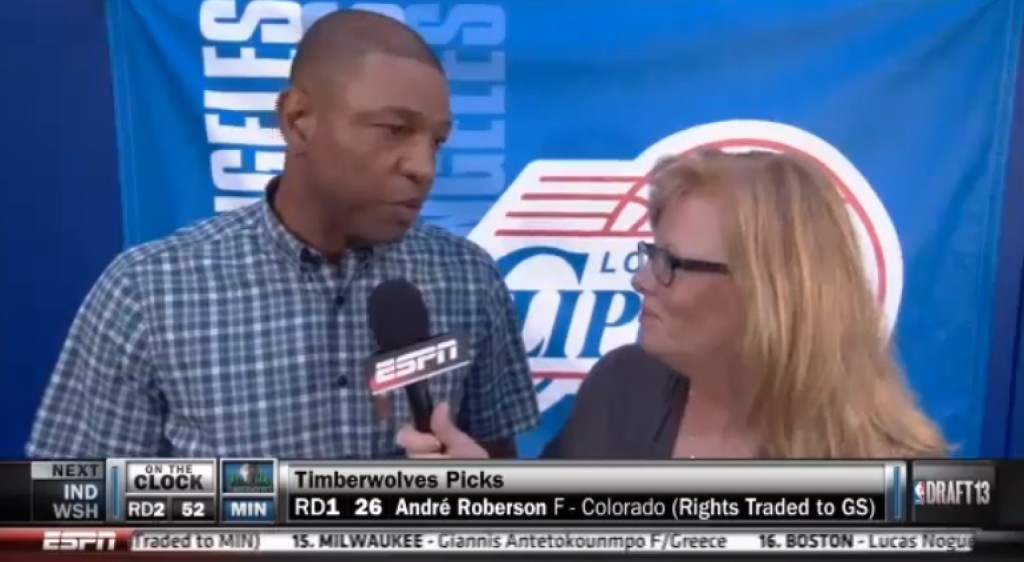 On NBA Draft night last year, Bill Simmons and former Boston Celtics coach Doc Rivers got into a war of words.  Their spat made for great television.

Simmons, a former blogger turned ESPN basketball analyst – and lifelong Celtics fan (he wears it on his sleeve) – was disappointed to see his team trade away Paul Pierce and Kevin Garnett for a handful of draft picks, not to mention see the title-winning Rivers leave for ironically greener pastures.  In a live, on-air interview, ESPN’s Shelley Smith asked Rivers, who now coaches the Los Angeles Clippers, what he felt about Simmons’ accusation that Doc had “quit” on the Celtics.  Rivers replied “I would like to call him an idiot but I’m too classy for that.”

The cameras immediately panned back to Simmons and company in the studio who, somewhat stunned, responded “The truth keeps changing.  He’s giving different quotes about this.  He did know.  He didn’t know.  He kind of knew. He wanted the trade to happen.  He was coming back.  He needed a year off.  When he sticks to a story, I’ll believe the truth.” 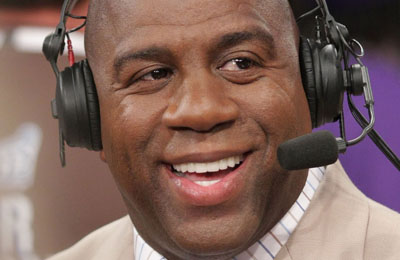 Now, allegedly, Simmons has pissed off another former point guard: Magic Johnson.  By some accounts (Deadspin), one of the greatest basketball players of all-time and a pretty darn good analyst as well, is leaving the set of NBA Countdown because of Simmons.  In his departure, the ever-diplomatic Magic had all the right things to say.  “I love ESPN.  Unfortunately, due to the nature of my schedule and other commitments, I don’t feel confident that I can continue to devote the time needed to thrive in my role.”

This off-season, Magic became part owner of the Los Angeles Dodgers but one can only assume leaving his first true love was a difficult call, despite his other responsibilities.  After all, baseball season and basketball season don’t really coincide and you know Magic will be tuned into whatever happens on the hard court this year.  That’s what he does and who he is.  Simmons has denied any tension between the two but one can’t help but wonder whether he is rapidly alienating a number of key figures in the sport which he covers.

I actually like Simmons or at least I used to.  The kid (he’s 44) can definitely write, that is, as long as he keeps his pieces down to 3,000 words or less, which is a rarity these days.  He’s every blogger’s dream: boy starts sports blog before it was fashionable to do so, amasses huge following, makes it big, becomes ESPN broadcaster, hob-nobs with NBA big-wigs, all up until the part where he pisses off legends like Magic and Doc.  What’s next?  The dissing of Michael Jordan? 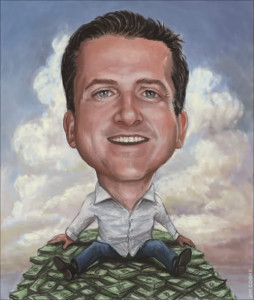 Simmons has left the world of casual blogger and entered the world of serious journalism… as much as ESPN can be considered serious journalism.  I was always taught that when one reports the news, one must shed one’s bias and be totally impartial.  Isn’t that Journalism 101?  Far too many of the talking heads on ESPN have abandoned that rule.  If I have to hear one more segment where Simmons refers to the Celtics as “we,” or listen to someone like Mike Greenberg tell us he’s a lifelong Jets fan and is either happy or disappointed with “his” team, I may barf.  If someone’s reporting the news, why should I know or even care about their allegiances and wouldn’t that sway my opinion of the facts they’re supposed to be reporting?

It’s why I change the channel.

I run SportsChump.net and have never claimed to be a journalist of any sort.  I write about whatever’s on my mind and have only my readers and conscience to answer to.  I’m not here to break any news or scoop any stories.  Bill Simmons used to do that.  Now that he’s employed by ESPN as a host of Countdown, he is not afforded the same freedoms of speech he once was.  It’s also safe to say that several of ESPN’s “30 for 30” episodes that Simmons has spearheaded, while well-produced, are clearly slanted.  Simmons has also apparently failed to pay the proper respect to those who deserve it by not practicing journalistic integrity.

For every basketball fan who enjoyed NBA Countdown (it was a pretty damn good show) Magic’s departure, and the subsequent departure of Michael Wilbon, is a shame for they, along with Simmons and Jalen Rose, appeared to have some sort of camaraderie.  Who knew that was because Simmons was just grating their nerves?

One can’t help but wonder the real reason Magic decided to leave the show.  We may never know the real truth.  Either way, Simmons’ bias is indisputable and wearing thin.  One of ESPN’s best television shows has suffered as a result.

20 thoughts on “The Magic is gone: Bill Simmons, Mike Greenberg and the increasingly annoying media bias of ESPN”