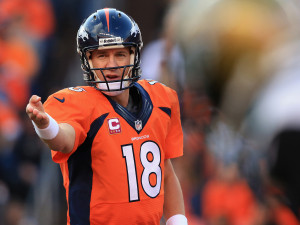 While Eli Manning is suffering with the interception bug and a winless start with the Giants, things could not be going any better for big brother Peyton and the Broncos. While Eli is on pace to throw the most interceptions in a season in 25 years, Peyton is on pace to break the single-season record for touchdown passes, and the 6-0 Broncos look like the best team in the NFL by some distance.

Quite naturally, Denver’s amazing start and the manner in which it’s been achieved have many wondering if they can have a perfect season. Peyton would no doubt be content with matching Eli with a second Super Bowl ring, and while NFL odds are greatly in favor of that occurring, it can’t be denied that, based on current evidence, a 19-0 season is well within their reach.

Offensively, the Broncos look like they can score almost at will. Peyton’s had many great seasons, as indicated by his haul of MVP trophies, but to be this good at this stage of his career is absolutely astounding. Defensively, there are many better units in the league, but they’ve made the stops when they’ve needed to. And when you have an offense that looks primed to be the most prolific in NFL history when all’s said and done, one or two well-timed stops can help a close game get out of hand in a hurry.

That being said, getting to 19-0 or even 16-0 is a tall, tall task, and the odds are in favor of a slipup happening at some point. In fact, it perhaps should have happened at Dallas in Week 5, when Tony Romo, crucial late interception and all, played as good a game as any quarterback has in recent memory, but it didn’t. Six of Denver’s last ten games in the regular season are away from home, and there are some tricky ones in the bunch, most notably against the Patriots, the last franchise to seriously challenge for sporting immortality. It starts with Sunday’s trip to Indianapolis, which will mark Peyton’s first game at Lucas Oil Stadium since the Colts’ 17-16 wild-card round loss to the Jets on January 8, 2011. Given his motivation factor going in, don’t bank on him having a losing return, but it won’t be a surprise if it does somewhere along the way.

Even if they lose at least once in the regular season, it looks like it’ll be a tough ask for someone to stop them in the postseason, but as the 2007 Patriots found out all too well, even the best can be brought down by the right team. You know every opponent from here on is going to give the Broncos their best shot, but we’ll see if that’s enough to stop what could be a historical season, undefeated or not.