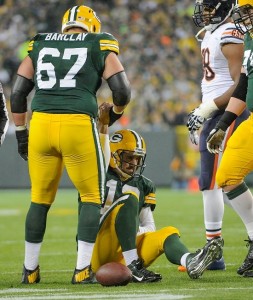 How many out there can name the backup quarterback for all 32 NFL teams without consulting ESPN or another internet outlet? If you can, you’re a more observant fan than most. It’s understandable that few will get many answers correct. For many teams, the backup quarterback garners little attention, because he’s likely to see only a handful of meaningful snaps, if that, during the season.

But while being the backup comes with the likelihood of little actual on-field pressure, the role arguably comes with as much pressure as it does for a starting quarterback, because there’s always the threat that you could be thrust into a key situation at any moment if the starter goes down, and even your best could not be enough to avoid criticism if you’ve stepped in for a beloved starter like Tom Brady, Drew Brees, or in Green Bay’s unfortunate case, Aaron Rodgers.

Heading into Week 9 showdown with Chicago, Rodgers was in the midst of putting together yet another fine season, and the Packers had won four straight and were looking like they could very well be a part of the live 2014 Super Bowl betting options come February. But in the first half against the Bears, Rodgers went down with a shoulder injury. The Packers went on to lose at home to their fierce rivals and, thanks in part to their offense being decidedly less prolific than it is with Rodgers at the helm, have lost the next two since, falling from first in the NFC North to third and putting their postseason hopes in a precarious position. And with Rodgers out for at least another game and emergency starter Seneca Wallace going down with a groin injury against the Eagles in Week 10, the Packers have had to turn to former backup Matt Flynn to backup Scott Tolzien, who was on the practice squad before Rodgers went down. Talk about raining when it pours.

Sure, the backup is the backup for a reason, and there’s almost certainly going to be some drop in the level of play and production if the backup steps in. And sure, no one wants to make a habit of doling out big bucks to a backup or use too many high draft choices on players that might not be around for too long. But investing in a quarterback who will, at the very least, likely not suffer out in the spotlight, and then somehow convincing said backup that it’s worth his while to stick around, could certainly come in handy if disaster ever strikes and the star QB goes down for a game, a month, a season. Just ask Mike McCarthy and the Packers, who no doubt are wishing their injury report–and the NFL standings–looked a lot different right about now.