After the debacle that can be commonly described the 2013 Florida football season, there is very little for anyone wearing orange and blue to smile about. 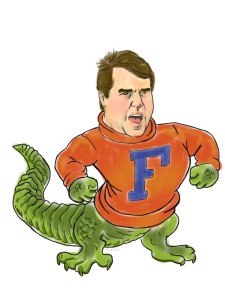 Fear not, my fellow Gator fans, for you have come to the right place.  Please allow SportsChump to sprinkle a little sunshine into your already dreary lives.

As you all know, or perhaps have intentionally forgotten at this point, the Florida Gators recently lost to Georgia Southern in their eleventh game of the season.  That game is their traditional tune-up before Florida State weekend and is generally scheduled with patsies U.F. pays a half a million dollars or so to come in and receive an ass-whooping.  Last Saturday, Georgia Southern was no patsy; they were the ones whipping ass.

As Gainesville Sun sportswriter Pat Dooley accurately pointed out, “Georgia Southern looked like they were the better team.”   That’s because they were.  The Eagles from Statesboro, Georgia traveled 250 miles southward to beat the downtrodden Gators without completing a single pass or amassing a single yard in the air.

But let’s not dwell on the negative, shall we?

Here are some of the funniest thoughts, texts and Tweets that came out of the weekend that every Gator fan wants to forget.

34 thoughts on “Tweeting Will Muschamp”