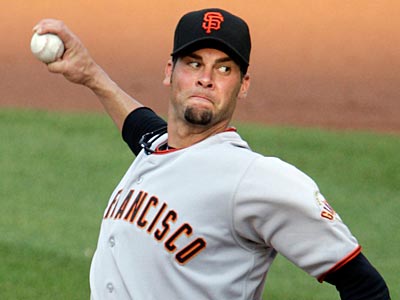 The San Francisco Giants have agreed to re-sign free agent Ryan Vogelsong to a one-year contract worth a reported $5 million, with the possibility extending the deal at the end of 2014. The franchise had made it clear they wanted to keep the majority of their pitching roster intact, and the Giants are rightly being tipped by Betfair.com as possible dark horses next season.

The experienced right-hander makes it three starting pitchers the franchise have signed this offseason, joining Tim Lincecum and Tim Hudson in a strong bullpen. The Giants signed two-time NL Cy Young Award winner Lincecum to a $35 million, two-year contract to replace Barry Zito, bolstering an already-strong roster ahead of the new year.

San Francisco have also signed left-hander Madison Bumgarner and right-hander Matt Cain to new long-term deals along with catcher Buster Posey. The Giants also splashed out in order to reward right fielder Hunter Pence with a $90 million, five-year contract following his ever-present season for the Giants.

After re-signing Vogelsong, the Giants will be hoping the pitcher can improve his figures next season. The 36-year old finished 4-6 for the year with a 5.73 ERA (58 ERA+) and 1.56 WHIP in 103 2/3 innings, missing three months of the season with a broken finger during a frustrating year for the veteran pitcher.

Since returning to San Francisco in 2011 after a few years spent plying his trade in Asia, Vogelsong has gone 27-16 with a 3.05 ERA (115 ERA+) and a 1.24 WHIP in 369 1/3 innings for the Giants. Vogelsong won three games during the 2012 postseason for the eventual World Series champion Giants, including the 4-0 sweep of the Tigers to help the team to a second championship in three years and surprise a good number of Betfair customers.