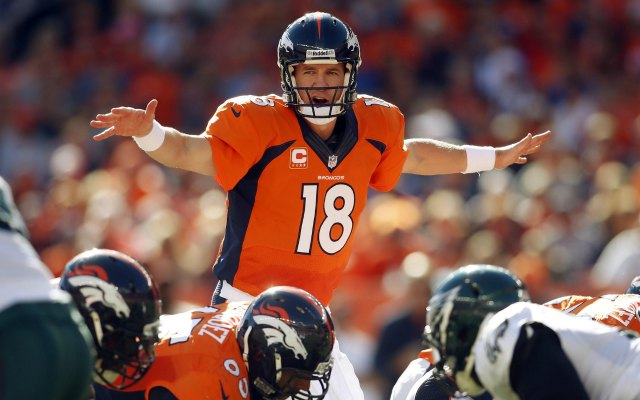 Peyton Manning is arguably the greatest quarterback to ever play in the NFL.   Sure, Joe Montana’s got four Super Bowl rings, Tom Brady has his three and Johnny Unitas and others before him redefined the game vertically.  But Peyton Manning has a record four MVP awards and may very well be on the way to his fifth.   He is only 30 touchdowns and about 7,000 passing yards behind Brett Favre, who is the career leader in both those categories.  Peyton will claim both those records within two more seasons.

But more than all that Peyton is a likeable guy.  He’s never out womanizing, driving intoxicated or taking drugs to enhance his performance.  He is a student of the game and one of the most respected, if not feared, athletes in the league.  There’s a reason Colts fans mourned his departure like the passing of a good friend.  When he lost the entire 2011 season due to multiple neck surgeries, a nation of football fans shuddered and wondered if he’d ever be the same.  Memo to those fans:  he may be better than ever before. 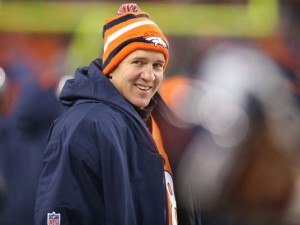 Nobody ever has a bad word to say about Peyton, that is, until he plays in the cold weather.

After a Denver Broncos loss to the New England Patriots in wintery Foxboro weather two weeks ago, and a sub-par game by Manning standards, out came the boo birds.  He can’t throw in cold weather, the critics said.  He can’t throw with gloves on, they continued.  The weather, and a potential frigid Super Bowl XLVIII in New York City, will ultimately be Peyton’s demise.

Well, Peyton has an answer for those critics, which is just another reason we like him so much.

“Whoever wrote that narrative can shove it where the sun don’t shine,” Peyton told a local radio station of his cold weather critics.  That’s just Peyton being Peyton.  He’s got that quirky, Southern sense of humor and he’s not afraid to speak his mind.  Not only is he reinventing the game in his own right, at 37, he’s still the best quarterback in a league full of pretty darn good ones, and he’s his own worst critic.  To hell with the others. 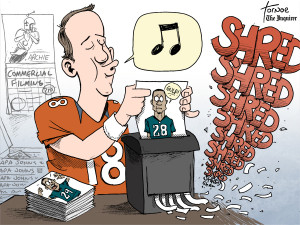 Every Broncos game is a must watch to see how pinpoint accurate this guy can be and how he shreds opposing defenses so effortlessly.  However, don’t be fooled.  There is effort, probably more than anyone who’s ever played the game.  There’s not a moment on the sidelines where you can’t find Peyton studying photos of opposing defenses or coaching up a teammate.  He’s jokingly referred to as the best offensive coordinator in the league.  The worst thing we can say about him is that his Poppa John’s commercials are lame and that’s probably only because Poppa John is holding him back.

His sound bites are as entertaining as his passing game.  His SNL United Way skit was one of their funniest shorts ever.  Whoever publicly proclaimed he can’t play in cold weather must now be secretly hiding with their tails between their legs, especially after the last two weeks.  He went into Kansas City to beat the Chiefs, passing for 403 yards in the process and after a sluggish start against the Titans this week, Peyton got hot (in the cold, with gloves on) and threw for four more touchdown passes and another four hundred yards.  The Broncos put up fifty plus points (for the third time this season) reminding the Titans that they’re the Titans.

So let’s enjoy him while we got him and the fact that we still have a few athletes left as role models to look up to.  A determined Peyton can be a very scary thing.  He’s got about three more years of playing at the highest level.  When that time comes and Peyton leaves the league gracefully as he likely will, if there was ever any doubt as to whom the best to ever throw the pigskin around the yard is, another MVP and Super Bowl trophy will make that question a lot easier to answer.