As most of you already know, I went to high school overseas.

From the tenth through twelfth grades, I lived in Santiago, Chile.  Those were a memorable three years but I’m not about to bore you with anymore sappy stories of my adolescence.  Been there, done that. 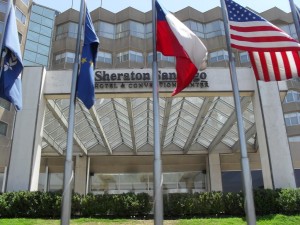 No, this story is about yet another one of my random brushes with sports greatness and as usual, it’s a tale you won’t believe.

When we first moved to South America, we stayed at the local Sheraton for nearly a month.  The house my family had rented was not move-in ready yet.

It is at that time when I first befriended Kid Sheraton.  You’ve read about Kid Sheraton on this site before.  He and I have now been close friends for over thirty years and while I’ve bested him on the golf course, I’ve never so much as taken a set off him in tennis.

There’s a reason for that.

As Kid Sheraton spent much of his life in and out of Sheratons around the world, where his father was employed for years, he was always surrounded by the greatest tennis pros money could buy.  I don’t mean to suggest that Kid Sheraton didn’t work hard at his game.  He obviously did.  He played nearly every afternoon under his coaches’ tutelage.  Hence his still undefeated streak against me.

Kid Sheraton and his father would also occasionally play doubles against me and my father.  Those matches were a little more even as my dad was a pretty decent tennis player in his own right.

Well, one afternoon, Kid Sheraton’s family invited us over for a friendly match of tennis.  As his father ran the hotel, we could pretty much get on the courts whenever we wanted. 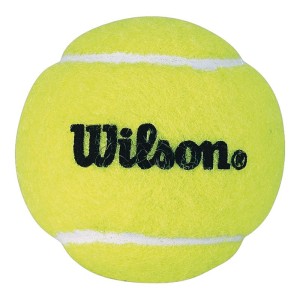 This was right around the time Wilson began experimenting with the production of its tennis balls.  As we all know, sporting goods manufacturers are always trying something cutting edge to gain a niche in the marketplace.  Over the years, racquets have gone from wood to aluminum to graphite, becoming lighter and larger.  In 1985, to go along with the growth in popularity of oversized racquets, Wilson thought an oversized ball (7% larger than the ordinary tennis ball) would attract more people to the game.  The oversized tennis ball would end up going the way of New Coke and the Betamax but not before the four of us spent an afternoon batting them around the Sheraton courts.

Now the four of us weren’t horrible but these tennis balls were not the easiest things to hit.  It was like swatting a grapefruit.  As a result, we would occasionally shank a ball, or two, or five, onto the court next to us.

This is when the fun starts.

At that time, the Sheraton was one of the nicest hotels in Santiago.  They often hosted whatever stars would travel into the country for whatever reason.  That included the 1984-5 Swedish Davis Cup tennis team.  Well, not only did the Swedish Davis Cup team happen to be staying there, that afternoon they happened to be volleying on the tennis court… RIGHT NEXT TO US! 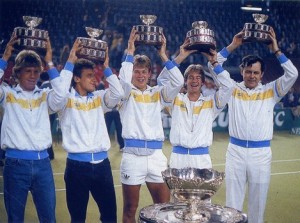 For those of you who don’t follow tennis, you should know that Swedish Davis Cup Team was one of the greatest in history.  On the court next to us stood Anders Jarryd, Henrik Sundstrom, Mats Wilander and a young, up-and-comer by the name of Stefan Edberg.  Wilander already had a few major victories under his belt and Edberg was on the verge of becoming an international star yet there they stood, tennis legends stopping every few minutes to hit back over-sized Wilson tennis balls back onto our court.

Now, I was a brat on the tennis court.  I was cut from the McEnroe cloth.  I still get that way on the golf course sometimes.  If a shot doesn’t go my way, I exhibit the rather undisciplined tendency to let the profanities fly.

So now imagine a young Edberg and Wilander rolling their eyes as a bratty young American yelled “Fuck” and “Shit!” at the top of his lungs every time some felt, yellow moon ball rolled into their space.  But what were they gonna do?  One of the guys hitting the balls onto their court ran the hotel.

No word as to whether the Swedish Davis Cup team ever returned to that hotel.  Kid Sheraton and I still chuckle about that afternoon, and those balls, to this day.

Oh and here’s another interesting fact.  That Swedish team went on to win the Davis Cup in 1984, 1985 and 1987.  In ’84, they beat the American team which featured both McEnroe and Jimmy Connors.

I guess I should go ahead and apologize for that now.