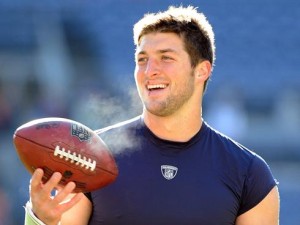 Hey, if ESPN can still rant and rave incessantly about the NFL worth, or lack thereof, of Timothy Richard Tebow, why can’t a fellow Florida graduate jump on the Te-bandwagon?

As we all know, Tim Tebow, Heisman Trophy winner and poster boy for all things right and just in the universe, went from being a first round draft pick to a playoff game winner to becoming virtually unemployable.  Yet, like a cat thrown high into the air, we always knew he’d land on his feet.  We just never knew it what capacity.  Canadian Football League?  Arena Football League?  Vatican Football League?

Well, this Super Bowl, we might just discover Tebow’s true calling.  Sure, he might not be pitching the pigskin around the yard or running over wannabe tacklers but Tebow may have stumbled upon a much more profitable venture.

T-Mobile was smart enough to recognize Tebow’s marketing value and came up with this commercial which is bound to be a hit for Super Bowl XLVIII.

36 thoughts on “Has Tim Tebow finally found his calling?”