I came home the other morning to find a phone book sitting on my front door step.  They’ve gotten considerably smaller over the years. 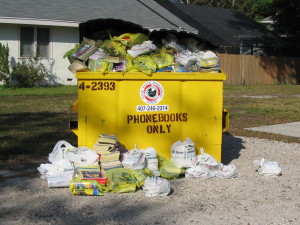 I grew up in New York City.  Back then, we had three separate phone books per household, one yellow and two white pages and we needed them all.  The things were huge too.

If you wanted a pizza delivered, you had to thumb through that lengthy “P” section, assuming you didn’t already have the number memorized.  Of course, that was before Al Gore invented the internet and when most of America still knew what a landline was.

Now we all have internet on our phones.  Heck, even the homeless lady down the block from work has an iPhone.  So why are we still killing trees to provide every residence in America with a phone book?  Wouldn’t it be easier, and certainly more efficient, if Ma Bell, or whoever’s wasting their precious time and resources printing these things, to simply find the three remaining people in this country who don’t have internet access and deliver phone books to them instead of dropping them on the doorsteps of the 300 million who have absolutely no need for them?

Or would that make too much sense?

It’s Gotta Be The Shoes

I have officially heard it all.  Who knew that a pair of sneakers could be hazardous to one’s health? 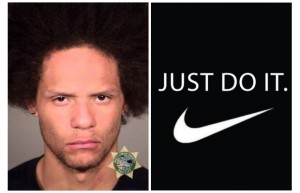 Let this be a lesson to you.  Never smash anyone in the face with your shoe.  But if you do, feel free to blame someone else for the damage.

An Oregon pimp named Sirgiorgio Clardy is currently serving time for stomping on the face of a ‘customer’ who refused to pay for services rendered.  So it only makes sense that this industrious fellow is now suing the maker of his shoes, Phil Knight and Nike, for not providing them with a warning label.

How much would you love to be a fly on the wall of Phil Knight’s office when news of this impending lawsuit came across his desk?  Knight is the co-founder of Nike.  He’s worth $16.8 billion but how dare he so carelessly release a product without thinking about the safety of those who might get stepped on.

Clardy is suing Knight for $100 million.  Nike has declined to comment.

I’d say it’s highly improbable that this case ever sees the inside of a courtroom.  But just in case, the next time you negotiate with a pimp, be sure his shoes come with a warning label.

A Meth-od To Their Madness

Apparently, there’s something in the drinking water in Oregon.

If you thought the case of the pimp shoe stomper was odd, an Oregonian couple was recently arrested after tipping their waitress… in crystal meth.  Heck, that’s gotta be better than 20%, right? 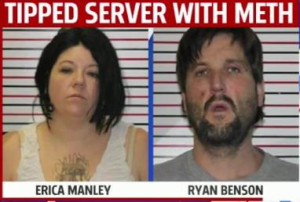 I’ve worked in the service industry a long time and have gotten some interesting tips over the years but never a bag of meth.  Wait, I take that back (just kidding).

Ryan Bensen and Erica Manley were out for a romantic night on the town and decided to dine at a local steakhouse, which begs the question why were they even eating if they were all hopped up on meth?  When it came time to pay their bill, they left a bag of methamphetamines in a white envelope on the table as a gratuity.  I guess they felt they were just being thoughtful.

The server immediately called the police who then found the couple, obtained a warrant to search their hotel and subsequently arrested them.

No word as to what kind of shoes they were wearing.

The Good, The Bad And The Heimlich

I remember Randy Couture giving an interview back when he was filming The Expendables.  The reporter asked him who he thought was the baddest dude on the set, a semi-legitimate question considering he was making a film with the likes of Chuck Norris, Arnold Schwarznegger and Jet Li, yet still a somewhat ridiculous one considering Couture was once a UFC Champion and the others are one step away from a nursing home.

He might want to reconsider his answer, however, for some movie stars are more, bad-ass than we think. 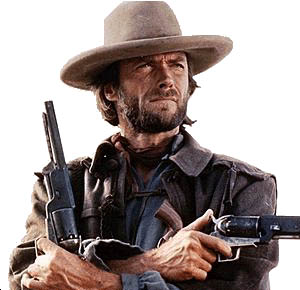 At a recent PGA Tour event (where else would 83 year olds hang out), Clint Eastwood apparently saved the life of a golf official by performing the Heimlich Maneuver.

Can you imagine choking on a hot dog, being totally unable to breathe, when from out of nowhere Dirty Harry gives you a bear hug from behind, eliciting you to cough up the bun that’s lodged in your esophagus?   Do you feel lucky?  Well do ya’, punk?

The octogenarian already boasts a legendary film career, a governorship and now he’s running around saving people’s lives.  And to think I have a tough time getting off the couch in the morning.