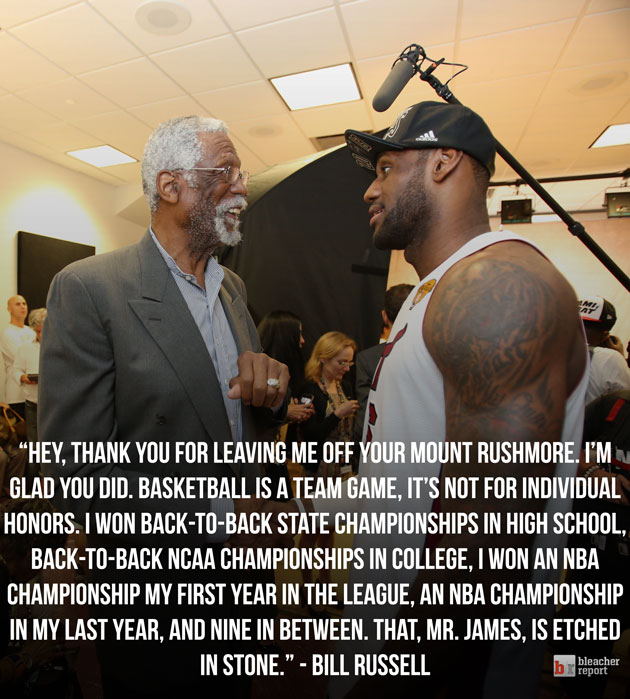 I had really planned on leaving this one alone.  After all, choosing the four best players to have ever played a sport is entirely subjective.  I might include Player A on my mountainside and justify that argument until I’m blue in the face only to hear you make a legitimate case for Player B.

That’s what happened all last week after some reporter asked LeBron James who he felt belonged on the NBA’s hypothetical Mount Rushmore.  I suppose it was a worthwhile question considering it inspired a week’s worth of debate.  The only problem is, LeBron got the answer wrong, or at least Bill Russell thinks he did.

LeBron’s point, while accidentally offending the sport’s most decorated champion, was that by the time his career was over, sculptors would have to break out their chisels to redesign the mountain with King James’ mug alongside it.

I know I’m in the minority here but personally, I don’t have a problem with James’ bravado.  It’s not like either Tim Hardaway or Boris Diaw was saying they belong there, both of which would have been laughable suggestions.  No, these rather lofty aspirations came from an athlete with a legitimate point and the talent to get him there.  LeBron might be on that mountainside when it’s all said and done.  Besides, find me a superstar athlete that doesn’t have an ego and I’ll find you a guy who couldn’t cut it in the league.

Since we’re on the topic of Mount Rushmores, I’m going to go ahead and give you mine.  Take it for what it’s worth.  I’m not saying this should be your NBA Mount Rushmore or even the NBA Mount Rushmore.  I’m merely saying that if I had to choose four players that best represented the NBA and who meant the most to the game over the years, these would be my four. 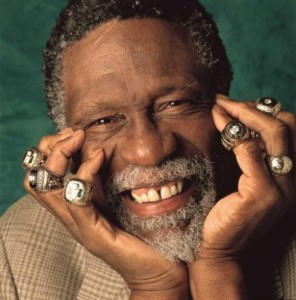 BILL RUSSELL:  There, I got that out of the way.  Maybe he’ll be a little less pissed now.  I never saw Bill Russell play but I can tell you this.  The guy won eleven championships in thirteen years.  He was the best player on a team that dominated the sport for a decade.  He was the first African-American man to coach in the NBA and won two of those Celtics championships as player/coach.  He defined the role of shot-blocker/defender, something so many of the league’s big men have yet to master but still attempt to emulate.  And he consistently got the best of the man who is the second face on my Mount Rushmore…. 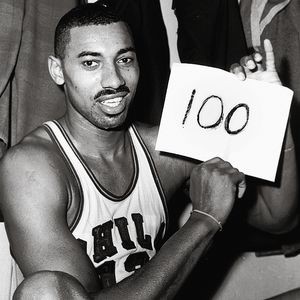 WILT CHAMBERLAIN: Have you ever seen the NBA record book?  Go ahead and take a look, I’ll wait.  Sure, Wilt the Stilt might not have the titles Bill Russell has but he owns NBA records that will never be broken.  Wilt has almost 24,000 career rebounds.  To put things in perspective, Kareem Abdul-Jabbar has 17,440.  Kevin Garnett, the NBA’s current active rebounding leader has just over 14,000.  Tim Duncan, largely considered the game’s greatest power forward, or at least one of them, has less than that.  Wilt averaged 22.89 rebounds per game.  (Russell was just shy of that mark with 22.45).  After that, no one else is even close.  Wilt once averaged 50 points per game for an entire season.  He led the league in scoring seven times.  He scored 100 points in a single game, a record which still stands and is virtually untouchable.  Wilt changed the game.  He remains its most dominant player.  He was Ruthian in size and scope.  He is second behind only Michael Jordan in points scored per game, which leads us to our third member of the mountainside… 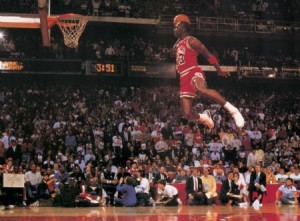 MICHAEL JORDAN: You’d be hard-pressed to find any self-respecting basketball fan who would exclude Jordan from their Mount Rushmore.  He’s nearly unanimously considered to be the greatest player ever.  He won three straight championships from 1990 to 1993, then decided to retire because nobody in the league could cover him, then returned to prove that theory once again by winning three more championships with an entirely different team.  Not only is he the game’s career leader in points scored per game (30.1) but he’s also the league leader in playoff points per game (33.45).  He led the league in points scored nearly every season he played.  He won five MVP Awards but he should have had more than that.  Perhaps most importantly, Michael Jordan was the game’s most marketable player, largely responsible for the game’s popularity today.  But someone made the game marketable before MJ ever stepped foot in the league, and that man was … 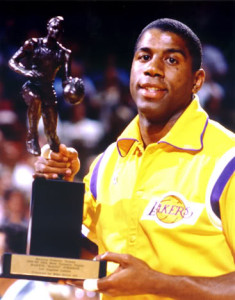 MAGIC JOHNSON: If I could, I’d have my sculptor take Magic Johnson’s face and make half of it look like Larry Bird’s.  It would be only fitting.  After all, theirs was the rivalry that brought the NBA into America’s living room.  The Celtics-Lakers dynasties dominated the NB80s and while Larry Bird was like nothing we’d ever seen, neither was Magic.  He was a 6’9” point guard.  They still don’t have those and the game has evolved exponentially since then.  Magic won five titles, three league MVPs, three Finals MVPs and he perfected the no-look pass.  He WAS Showtime.  Not to mention the earth stood still when he publicly admitted having the HIV Virus.  He was one of the game’s most dynamic personas and one of its most versatile athletes.

Look, anybody can come up their own Mount Rushmore.  Those of us killing time at the water cooler this week did exactly that.  I’m not going to tell you your list is wrong because it differs from mine.  If you want to put Larry Bird or Oscar Robertson or Kobe Bryant or Kareem on your list, I’ll entertain a listen.

Yet we may very well be putting LeBron’s face up there when it’s all said and done.  He’s already two championships and four MVPs in and he’s only 29 years old.  Knocking one of the aforementioned names off will be awfully tough but he appears up to the task and a determined LeBron is a very scary thing.

Narrowing the tens of thousands of players to have ever played the game down to only four is an exercise in futility.  But if you HAD to choose just four, which is what everyone and their mother was doing this week, now you have mine.

Feel free to disagree.  I know LeBron does.

34 thoughts on “Have we nothing better to talk about? Rethinking the ridiculousness of the NBA Mount Rushmore argument”