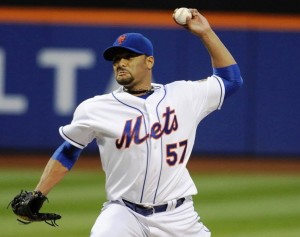 Yankees scout Tim Naehring was one of seven MLB scouts to head over to Tampa’s Fort Myers high school on Tuesday to watch the eagerly anticipated return of free agent Johan Santana.

Sadly, it seems Naehring’s trip was wasted as Santana proved a shadow of his former self at the workout, which was meant to place him at the forefront of the shop window for teams searching an experienced pitcher in their rotation.

Santana recently proved to fans of baseball and MLB World Series betting that he is way off the former levels at the mound that once earned him a glorious Triple Crown and two leading ERA figures in the American League.

The former Twins, and more recently Mets, pitcher could muster no faster than 81mph on his first major workout since tearing his left shoulder capsule in April last year. Since then, there has been suggestion among MLB betting pundits the 34-year-old would retire from baseball, and on Tuesday it appeared that decision may be made for him.

Averaging 78 mph with his pitch, Santana is certainly not worth the former $137.5m, six-year contract he had in Queens. He is likely to ask for much lower should a club gamble on the veteran, but the Yankees hopefully will stay away.

Granted, both Joe Girardi and Brian Cashman are on the lookout to bolster NY’s rotation, especially with the departures of Phil Hughes and Andy Pettitte. As for the remainders, CC Sabathia had a disappointing 2013 while 38-year-old Hiroki Kuroda is showing his age; Masahiro Tanaka looks exciting but is unproven in the MLB and Ivan Nova needs to prove his late 2013 form was not just a good patch.

There is still a veteran spot in this rotation if Girardi decides to fill it, although thankfully Santana will not be part of those plans.