Ken Griffey, Jr. will go down as one of the most talented players in baseball history.  He’s sixth all-time on the career home run list.  He finished his 22 years in the league with just shy of 3,000 hits and a rather respectable .284 batting average.  He’s a former MVP who boasted what many consider to be one of the sweetest swings in baseball. 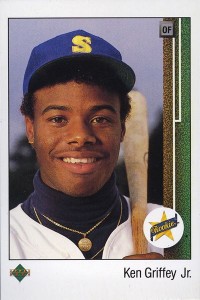 That doesn’t mean he’s not a total douche bucket.

Some Upper Deck boardroom executive recently decided it would be a good idea to anoint Ken Griffey, Jr. spokesperson for the 25th anniversary of their company, as if anybody still gives a shit about baseball cards.

Choosing Griffey made perfect sense.  His 1989 rookie card from their very first set was once valued at well over $300.  That card marked the apex of the modern collectibles industry and for years was the most coveted rookie card of his generation.

It wasn’t long after that, however, that baseball struck, the steroid scandal hit and a slew of baseball card companies flooded the market.

Back in the day, I actually made the mistake of buying one of those Griffey rookies at an auction for over $100. You can currently find them on eBay for less than twenty bucks.  Oh well, live and learn. 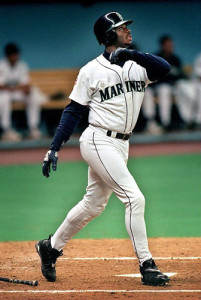 Regardless of the diminished value of his rookie card, most fans still revere Junior as one of the greatest players of that era.  Mysteriously, he was one of the few of that generation that made it out of the steroid scandal scot free.  Never mind the fact that he led the American League in home runs for three straight years (1997-99) smack dab when steroids were running rampant.

Nope, for whatever reason Griffey always got a pass, a concocted symbol of the game’s lost innocence.

Now he’s marketing baseball cards and he’s not very good at it.  Earth to Upper Deck.  You probably should have signed someone a little more media friendly.

In a recent interview with Linda Cohn, one of ESPN’s most respected journalists, Griffey looked as if he could care less about his face time or the product he’s promoting.  Poor Cohn had to deal with the pouty Griffey who was apparently having a bad day.  Fortunately, Cohn, the consummate professional, knew to get in and out before Griffey bored us with another curt, and spectacularly rude, one-word response.  Nothing like another pampered athlete to fleece us into spending our hard earned money on the product he’s pimping.

Notice as the excited and rather enamored Cohn begins the interview.   Junior looks as if he couldn’t be bothered, giving answers that were Popovichian in their shortness.  The only difference is that Gregg Popovich isn’t getting paid to answer questions.  He does that because the league requires it.  He’s paid to make a winner out of the San Antonio Spurs.

I did a little research and could not confirm whether or not Upper Deck is paying Griffey to commemorate the anniversary of his rookie card but I’m pretty sure he’s not doing it out of the goodness of heart.  Shortly after the interview, Cohn Tweeted “For a guy who wants to be known for his smile he has a strange way of showing it.”  Griffey has since apologized.

Look, this may have been Griffey’s eight millionth interview of the day but that’s still no excuse.  One would think the five minutes allotted to ESPN would rank pretty high on the docket, not to mention treating others with respect are always valuable words to live by.

The guy made more than $150 million over his career in baseball salary alone.  I imagine neither he nor his grandchildren’s grandchildren will have a financial worry for the rest of their lives.  Was the Cohn interview really that much of a bother? 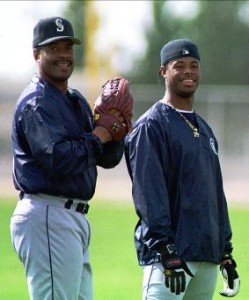 One of these days, we’re going to get tired of athletes acting like spoiled little children.  Griffey’s dad was a professional baseball player.  The kid was born with a silver spoon in his mouth.  Furthermore, he was born to play a game so many of us wished we were good at.  Perhaps a little humility and appreciation for the gifts he was given is in order.

If Griffey had something else on his mind that afternoon, Upper Deck should have postponed or canceled the interview.  If not, man up, answer the questions and don’t make people like me rethink your character.

Or maybe Griffey was just a douchebag all along and I never bothered enough to pay attention.