As rabid, unapologetic American sports fans, every Sunday during football season we huddle around or television sets, congregate at our local watering holes or if we have the funds, attend games with family and friends, eagerly anticipating what the next three hours hold in store.  Sundays in this country have morphed into an all new religious experience, not because of the morning sermons delivered by our pastors but rather for the afternoon passes completed by our quarterbacks.

We have become infatuated with all things pigskin.  If you don’t believe me, check the television ratings.  The NFL dwarfs everything else.  We buy jerseys, gamble, obsess about our fantasy football lineups and then, when our Sundays are over, we break down every aspect of what we just saw, scrutinizing every highlight and anxiously counting down the days until it happens again. 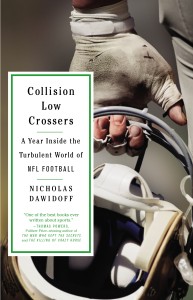 But as much as we obsess about football, we don’t really know what goes on inside an NFL locker room, the organizations, the time, the effort, the painstaking details it takes all those involved to put their particular product on the field.

Thanks to Nicholas Dawidoff’s “Low Collision Crossers: A Year Inside the Turbulent World of NFL Football,” we do now.  Dawidoff takes us inside the sanctuary that is the New York Jets and gives us a detailed, honest and heartfelt account of the blood, sweat and tears that lead up to the Sundays we hold so dear.

Crossers is unique in that it takes place not only in the midst of the NFL lockout but in the context of an ever-changing game that continues to grow exponentially in popularity while doing its best to protect the health of it players.  “As the game grew to a nine-billion-dollar revenue industry, with more to lose, the NFL seemed increasingly uncomfortable with the nature of what it was.  Revelations about the long-term effects of concussions had recently tarnished the NFL and made it seem to some like the Big Tobacco of Sports.  Was it acceptable to enjoy something that brutalized the minds and bodies of young men?”

Dawidoff take us inside an NFL organization, deeper than we’ve ever been, introducing us to the coaching staff, the players, the combines, the conflict, the intensity of draft day, the research leading up to it, the lifestyle, the tightly-knit family that is the organization and the other family those in football rarely get to see. 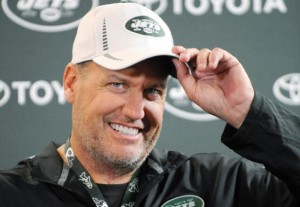 If you weren’t a fan of the Jets or their head coach Rex Ryan before reading this book, you will be afterwards.  “Ryan brought to mind a Coca-Cola belt politician planted atop the back of a flatbed truck, suit jacket flung at his feet, imparting jubilant election-week promises to the little guy.”  Dawidoff has a flair for describing his season with the Jets as both insider and outsider.  Former GM Mike Tannenbaum even fined him for showing up late to a team meeting.

Dawidoff reminds us the football locker room is not for the faint of heart.  This is particularly telling in the wake of the Richie Incognito-Jonathan Martin scandal. Rex Ryan’s father, coach Buddy Ryan “had contempt for sensitivity in men; he liked players who could handle being called pussy or slob or dumbass or worm while making them hit until they bled.  There was simply no such thing as political correctness in a football meeting room.  [Rex] Ryan urged those who worked for him to grow “skin like an armadillo” and advised them that the best way to approach anything was “blunt-force trauma.” With the Jets, Ryan imposed sensitivity fines on thin-skinned players and coaches.”  One can’t help but wonder how long Jonathan Martin would have lasted in that climate.

Coaches coach, players play and they all watch film.  “The players were abstractions, works perpetually in progress for the coaches to edit, improve, even transform.  It was up to the coaches to reimagine the familiar thing they saw on film in a new light.  That was really half of NFL coaching – thinking of one’s players as characters, each with a set of skills to model in the endless sequence of narrative experiments that sixteen times a regular season became a game plan.”

The book is chockfull of detailed accounts that any ardent football fan will enjoy and all the big names are there: Revis, Ryan, Pettine, Scott, Cromartie, Sanchez.  Crossers explains the painstaking process of interviewing and researching every potential draftee, the locker room camaraderie, the overall obsession to get everything they possibly can right with the understanding that despite their efforts, failure will still inevitably occur, at least for 31 of the teams in the league. 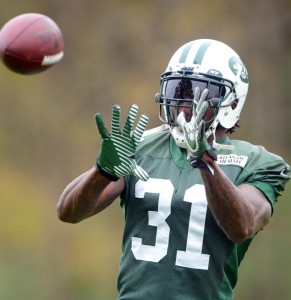 The book is long, at times as arduous as an NFL season.  At others, it is as real and as poetic as the most fluid football player you’ll ever see.

“In football, the life was so insular and demanding, so focused on those critical moments, that when things went wrong, the whole world for many coaches became fruitless and grim.  There was the stated belief that if you’d truly given your all, that was enough.  That wasn’t enough.  The point was to win, and all the games were closer than they seemed, which meant that losses were easy to reimagine as wins if only… it was maddening.”

If you’re a fan of the New York Jets, this book is a must.  If you’re an NFL fan yearning to learn more about what happens behind closed doors, this book is also for you.  Just be prepared for a 500-page commitment.  Hey, come on.  If Mark Sanchez can memorize the entire Jets playbook, tackling Crossers is nothing by comparison.