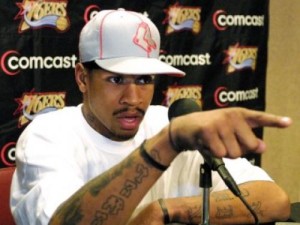 Of all the rules Commissioner David Stern enforced in his thirty years presiding over the NBA, his dress code legislation was one of the most criticized.

At one point, too many players began showing up to games or press conferences looking a little too hip-hop for the Commissioner’s tastes.  Concerned about the image of his league, Stern enforced a dress code.

For better or for worse, players now dress up in suits and ties, except of course for Tim Duncan who hasn’t worn a tie in his life.  Some players, like Dwyane Wade and Russell Westbrook realized the marketing potential of this move and have used it to their advantage.

In Stern’s defense, he didn’t require players to wear a suit and tie, just a collared shirt.  After all, he had a league to protect.  Yet we still blast the ever-blastable Stern for his rule’s racial overtones, as if a black man had never been asked to wear a suit before. 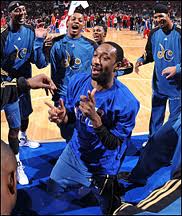 Stern would not tolerate anything he deemed a threat to the health of the league he governed.  For example, firearms are not allowed in NBA locker rooms.  So when Gilbert Arenas violated that rule, drawing an allegedly unloaded gun on a teammate then later joked about it, he was suspended for fifty games.  When Latrell Sprewell choked PJ Carlessimo, the league suspended him for 68 games.  When Ron Artest charged into the stands to “accost” a fan, he was only allowed to play again after a 73 game suspension.

Misrepresent yourself or the league and you would find out just how stern Stern could be.

Even Major League Baseball has finally put its foot down on the drug use that has plagued the league for years.  Violate the league’s drug policy this time around and you’ll be suspended for the post-season.  More than anything else they’ve tried so far, that potential punishment is bound to get players off the juice.

Employers have rules.  Break them and you will be penalized. 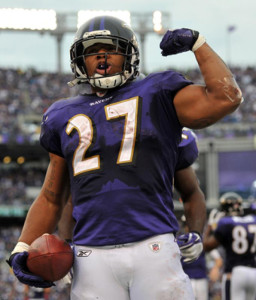 These Arms Were Made For Beatin’, And That’s Just What They’ll Do

On the other hand, the NFL continues to let its players run around like inmates in an asylum.  Ray Rice, who knocked his fiancée unconscious last month, will not be suspended by the league.  And now comes word that the backwards hat-wearing Colin Kaepernick is under suspicion of domestic violence.  In another week, it’ll be somebody else.  Just spin the wheel of misfortune.  We’re already waiting for half these players to buy a damn vowel.

In the Michael Vick case, the NFL let our legal system take matters into its own hands.  Upon his release from prison, the league suspended the unpopular Vick an additional two games just to let fans know they (quite laughably) disapproved of the crimes he had committed.

Why does the NFL refuse to hold its players accountable for its actions off the field?  Why are we rewarding guys by paying them millions of dollars for acting like criminals?  Where are the consequences for their actions?  How long until we as fans grow a conscience and decide we are no longer going to put up with it?  I don’t care if a guy can throw a ball a hundred yards or run faster than the speed of light.  If he’s smacking his wife around, I don’t want to watch him playing football unless it’s in a prison yard.

Goodell, control your employees.  They represent you, your league and your shield.  They can’t stick a needle in their backside but they can take a backhand to their girlfriends?  Be a man and take a stand against this behavior and I promise you it will be for the betterment of the league, just as implementation of a dress code was beneficial for the NBA.

39 thoughts on “The NFL Personal Conduct Policy: Not Worth the Paper It’s Printed On”