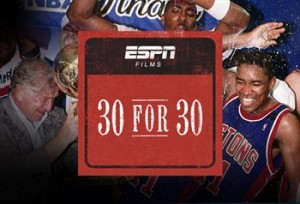 Once upon a time, NBA players beat the crap out of each other.  ESPN’s “30 for 30: The Bad Boys” pleasantly reminded us of that.  The two-hour, must-watch special highlighted the rise and fall of the Isiah Thomas-led, two-time champion Detroit Pistons of the late 1980s.

Times, however, have changed.  Punch somebody in today’s kinder, gentler NBA and be suspended for who knows how long.  Do so a few decades ago and such actions might be overlooked, or even rewarded.

Steve Nash being hip-checked into the sidelines, Jeff Van Gundy swinging wildly from Alonzo Mourning’s leg, Kurt Rambis getting clotheslined, Dr. J and Larry Bird grabbing each other by the throat, these are indelible moments in NBA history that David Stern would rather us forget. 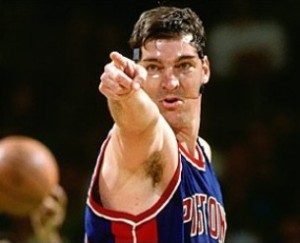 Those Detroit Pistons understood that beating the Celtics, Lakers and Bulls required beating up the Celtics, Lakers and Bulls.  But make no mistake.  In addition to the bullying, the Pistons were also quite skilled.  Joe Dumars could shoot lights out.  Vinnie Johnson was the most clutch bench player many of us have ever seen.  Dennis Rodman may have been the best pure rebounder ever, or at least the most instinctive.   And Isiah Thomas was the best point guard of his generation rarely mentioned.  After Michael, Magic and Larry, there was Isiah.

What that documentary reminded us – and if you haven’t seen it, I highly recommend you watch – is that you can never underestimate the importance of team chemistry, regardless of the image they portray or that is portrayed for them.  We just assumed these guys were thugs, and they were, but they were a tightly knit and determined group of thugs that ended up with two championship rings.

Those Pistons are the forgotten team of that era.  They bridged a generation of champions, by beating two and inspiring another. 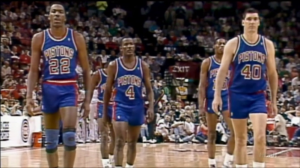 Their ways may have been unscrupulous, violent even but they are forever etched in history.

I hated that team.  Everybody did.  But watching “Bad Boys” reminded us of how they redefined the game.  Dare I say, in retrospect, they became almost likeable.

Kermit Washington once punched Rudy Tomjanovich in the middle of an NBA game.  He broke his jaw.  That hit forever changed the sport.

So did the Pistons.

We’ll never see that kind of play again in today’s NBA.  Not if Stern and his understudy Adam Silver have anything to say about it.  There’s too much money involved, too much image, too much at stake.  But that doesn’t mean we can’t reminisce fondly over the days when fouls were fouls and champions were built through blood, sweat and tears.

26 thoughts on “Once upon a time, there were Bad Boys”