V Stiviano is smack dab in the middle of her fifteen minutes of fame and she may be the ugliest, pretty girl any of us have ever seen.

In case you’ve been living under a rock lately, you know that V (does the V stand for something other than vindictive?) Stiviano is the key cog to the downfall of Donald Sterling.  Well, that and his inherent racism. 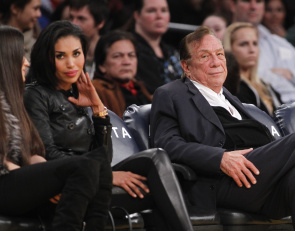 Don’t feel bad though, Donald.  Better men than you have fallen victim to a woman’s betrayal.

When a recording of Stiviano and Sterling first hit the internet, it was all anyone could talk about for it proved that old school racism was alive and well in the United States.

After conducting their investigation (and also fearing an impending player revolt), the NBA acted swiftly and abruptly by banning Sterling for life.

And now comes the Stiviano publicity train, as if we already didn’t have reason enough to vomit.  In an interview with Barbara Walters, Stiviano told us that Donald Sterling paid her, first on then off the books, essentially making her a prostitute.

She also told Baba they were just friends.  I’ve had a few of those “friends” in my day.  I just didn’t have to hand them over a paycheck for services rendered. 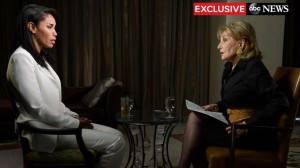 So off Stiviano rides into the murky sunset she painted for herself.  She made her bed and now she’ll lay in it, alone, until she finds another multi-millionaire to pay her for sex…. er, companionship.

My question to you is should we laud Stiviano for finally bringing down the racist giant that nobody else was able to?  She’s another modern anti-hero, her reality TV show inevitably forthcoming along with a miserable future alone.

If you were a guy, with money, would you go anywhere near her knowing that anything you told her in confidence, whether right or wrong, would end up on the front pages and cost you your livelihood?  Or maybe we should use her for patriotic purposes, sending her to uncover dirt against some of our foreign enemies.  She certainly knows how to get the job done.

Don’t get me wrong.  I don’t feel bad for Donald Sterling.  At this point, nobody does.  It was recently revealed that he has prostate cancer.  The lot of us sighed “Oh well” to the news.  He’ll be dead in a few years, if not sooner, leaving behind only a legacy of hate and discrimination.  And Stiviano will be driving around in her Rolls Royce without a care in the world.

Probably without a friend in the world either.

15 thoughts on “The innate hypocrisy of V Stiviano”