I received an email from my Uncle Alex with nothing in the text.  The subject line read “Still like instant replay?”

Years ago, right on this very website, he and I debated the merits of adding instant replay to Major League Baseball.  My uncle, the consummate purist was against it, saying mistakes and human error were and always will be a part of the game.  I suggested his prehistoric way of thinking was no longer an excuse and that baseball needed to modernize.

They did, sort of.  Since incorporating replay into the game, well, let’s just say things haven’t gone as planned.

SportsChump: At this point, I liken it to a guy who just bought a fancy new remote control and just can’t for the life of him figure out how to use it.

Uncle Alex: That’s the optimistic perspective.  The half-empty version is that he saw his neighbors all buy remotes for their TVs but then he found out you can’t use one with his brand.

SportsChump: Or perhaps he just wasn’t savvy enough to figure it out, which is a shame.  You think, after all these years, he’d be a smart and capable enough fellow.

Uncle Alex: Nice play on the metaphor for 4 am.   They have an uncanny knack for not overruling inconclusive plays and ruling the wrong way on obvious ones.  I think the next replay rule they should enact is to put it to an audience vote.  At least it will take less time.  🙂

SportsChump: I’ve been known to do my best work at 4 am. Can’t do fan votes, too much bias. They just need to find someone capable.  Let me know where to submit my resume. 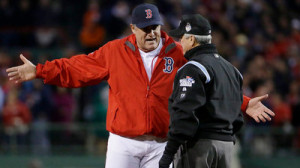 I knew it was only a matter of time before my uncle, a Red Sox fan, was affected by a call that would get him to change his tune.  Little did I know there would be TWO calls that sent good old Uncle Alex into a tizzy.  Both of those calls were reviewed and not reversed, one on a tag out, another on a foul ball called fair.  The only person less irate than my uncle was Red Sox Manager John Farrell whose team bore the brunt of the blown calls.

The e-mail string went on.

SportsChump: So…. after tonight’s call in the Sox game, can I assume you’re ready for another online debate?  Please say yes, please say yes.

Uncle Alex: I was wondering when you’d ask.  🙂  On another note – OK, it’s the same note – how could they fuck up that call?

So without further ado, here goes Round Two of our instant replay debate.  Just when you thought it was safe to go back into the water. 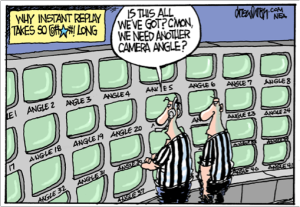 So, dearest Unc, what the hell is going on in Major League Baseball?   When we debated this nearly two years ago, we both agreed that instant replay would eventually happen with me thinking it was a necessity, you not so much.  But you weren’t necessarily against it because you thought they would screw it up, which they royally have.  You always said human error was part of the game.  Well, it’s more a part of the game now than it’s ever been.

Now that instant replay is here, I don’t think they scrap it.  That would be admitting defeat.  They’re going to have to figure out how to get this thing right.  How difficult can that be?  Where has our venerable commissioner, who has publicly proclaimed that he’s never sent an e-mail, been during all this?  Where is his commitment to get this right?  Perhaps he can’t work a VCR either considering his master plan to modernize the game has to date failed miserably.

Please tell us, now that instant replay is here to stay, what are we to do?

Uncle Alex: The interesting thing about instant replay is that often it’s not the replay itself that’s at fault; it’s still human error.  It’s just amazing that a bunch of people paid to analyze video look at the same thing that we do and miss it!  Just the other day, Yunel Escobar struck out on a 4-2 count.  That’s right; the MLB replay “experts” forgot the count when they reviewed a foul-ball call and mistakenly set it at 3-2. 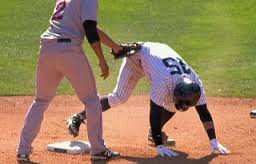 1.  Bad video feeds.  The mistaken ‘safe’ call on Dean Anna was because MLB claimed they didn’t have access to the camera everyone else in the world did.  Let’s hope that they fix that brilliant decision.

2. Rule interpretation.  The transfer rule has been subject to eyeball review for years, but slo-mo now makes an ambiguous rule even more difficult to enforce.  There have been several instances in which this controversial circumstance has arisen.  It’s also happened during ‘bang-bang’ plays at first base (when does the fielder control the ball?), which, BTW, was what threw Farrell into a tizzy and made him the first manager in history to be tossed for arguing replay.

3. Dipsh&ts at the helm.  The most frustrating circumstance is when umpires have the angles, the rule is clear, and they still screw it up. The Yunel Escobar call is a perfect example.   Another is a Markakis foul ball against the Red Sox that was obviously foul but called fair by replay umps.  There have been many of these.

And here is why I still contend that the way to fix replay is to dump it: 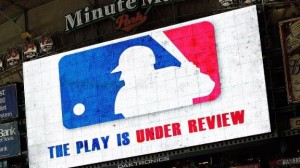 – It’s not saving much time, if any.  Many of these replay calls take several minutes to determine, and that won’t change.

– It’s impersonal.  I’d rather have four umpires who are there make the call, not some video jockey in a studio in NYC.  Refs on the field make the call in football, and I think it makes a difference to look your arbiter in the eye.  I doubt the Escobar 4-2 boner would have happened if the umps at the game were responsible. 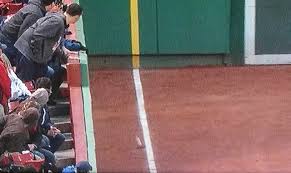 – To continue on that tact:  As I stated a couple of years ago, it’s an imperfect sport that lives on the subjective judgment of umpires.   Taking the manager arguing with an umpire out of baseball is eliminating one of the most fun parts of the game.

But if your contention is true – that replay is here to stay – we fix it by curtailing it quite a bit.  Fair-or-foul, home runs, catch-or-trap, and maybe a few others.    And we put the onus on on-field umpires to make the call.   Otherwise I think the game gets damaged, not helped.

All these gaffes are fixable.  And I don’t mean waiting another year until the owners meet in the off-season to discuss things over their Miller Lites and over-priced filet mignons.  We all knew this was going to be a work in progress so fix it on the fly and don’t apologize for doing so.  Fans will respect baseball more if they admit their mistakes and fix this thing now rather than continuing a full season with a laughably imperfect system.

Bad video feeds?  Let’s put more unobstructed cameras in the ballparks.  We’re talking about a billion dollar industry.  Cough up the coin to get it right.  Rule interpretations?  Who is it that doesn’t know the rules?  Umpires?  Managers?  Buy them all a rulebook and have them sleep with it under their pillow until they understand the difference between safe and out and fair and foul.  Dipshits at the helm?  Always has been, always will be.  Meet the new boss, same as the old boss.  Heck, the commissioner is the biggest dipshit of them all. 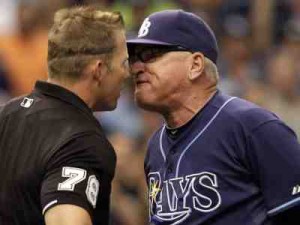 Managers arguing with umpires and unique baseball stadiums are two factors that make the game great but none of these are excuses for not being able to see whether chalk flies up when a ball hits the foul line or whether a catch is made.  These are black and white calls with no gray.  There is no legitimate reason the sport can’t get this right.  It’s broken now more than ever.  I say fix it.

Now, I ask, have I convinced YOU?

Uncle Alex: Sorry – still not convinced.  But I am resigned to it being part of the game, unless of course they don’t make it better, which IMHO requires major revisions to the current policy.  So here’s what I think:

– For the most part, they don’t need more cameras; they need to provide views from all of them and have someone with a post-simian IQ to interpret the video they produce.

– On-field umps should confer and if they develop a consensus that it’s the right call, it should go nowhere. THEY should decide if the tape should be reviewed or not.

– Consequently, the restrictions for manager objections should be eliminated. 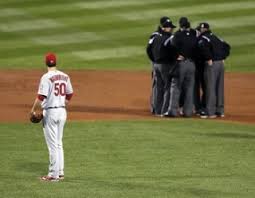 – If umps can’t come to a consensus, they should be given the feed and decide themselves.  This video control room crap is for the birds.  Why doesn’t the NFL do this?  Because it’s stupid.

– Any pretense that the review process will speed up ballgames should be dropped.

So, as Will Hunting asked, how do you like them apples?

SportsChump: The good news is that I feel we’re finally coming closer to some sort of agreement on the issue.  The bad news is that with the snail-like progress with which Major League Baseball is traveling to perfect its instant replay, we’ll probably be having another debate like this again soon.

I don’t think baseball boastfully sticking their chest out as the last major sport to institute replay is any sort of rebellion, as if they’re too good for it.  If they really wanted to make an impression, they should have done it better than everyone else by personally applying replay to the idiosyncrasies of their sport.

The problem is they haven’t yet and they look ridiculous for doing so.  Perhaps someone in the league office will read this open forum and invite us to sit down to figure out ways to get this thing right.

Is there anything else you’d like to add before Major League Baseball screws up another call?  I imagine imperfect replay should make for an interesting post-season.

Uncle Alex: Yes, I can’t wait to see the reaction if they mess up a pivotal postseason play.    I’ll leave you with this observation:  On tonight’s pregame show, the two play-by-play radio announcers for the Red Sox (Joe Castiglione and Dave O’Brien, both excellent play-callers) were lamenting the change in the home-plate collision rules – the conversation arising from a play during Sunday’s game.  Both agreed that umpires didn’t know how to interpret the rule, and catchers were equally confused – and that ultimately, the old rule was better.  I happen to agree with them, as I suspect most players do as well, but that’s beside the point.

The point is that baseball is a uniquely quirky sport, where many calls are made in the gray area between right and wrong.  Changing something with an expectation of a vastly improved resolution – like replay, the new collision rules, the short-lived transfer rule change, etc. – may lead to disappointing results.  If we must have replay, let’s be realistic about it, narrow its scope and keep the arbiters in the same zip code.   Or screw it – just let the video jocks call balls and strikes too.  That would be worth the price of admission.  🙂

25 thoughts on “Debating Instant Replay with my Uncle Alex”