Nothing says gangsta more than sharing a warm embrace with a stuffed purple dinosaur after a heartbreaking loss.

What am I talking about, you ask?

Obviously you haven’t been keeping up with the times. 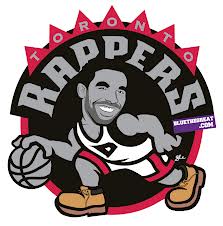 Canadian-born, Grammy award-winning rapper Drake is everywhere these days.  Apparently he’s a bigger sports fan than all of us put together.

He’s been spotted at every sporting event and in every locker room from here to Timbutku.  He’s even rumored to be hosting the 2014 ESPYs.

Well, after a hard-fought, seven-game series against the Brooklyn Nets, for a split second it looked like Drake’s favorite team, the Toronto Raptors, might knock off their veteran-laden opponents.  With less than ten seconds left to play in their game and their season, Terrence Ross intercepted an inbounds pass and somehow managed to throw it off Paul Pierce’s leg before it landed out of bounds. As soon as it became Raptors ball for the final time, Drake jumped around as if he were the most excited fan in the building, which he may very well have been.

Alas it wasn’t meant to be for Drake and his hometown basketball squad.  Down by one with six seconds to play, a driving Kyle Lowry had his shot blocked by the same Paul Pierce who was almost cost Brooklyn that series.

Seen below, a dejected Drake was spotted sharing his sorrows with the Toronto Raptors mascot.  It was quite a touching scene.

So to honor Drake’s undeniable fan-hood, I’ve decided to host another caption contest commemorating the love a man shares with his stuffed animal.

The winner of this week’s contest will received a stuffed animal of his choosing (from the bottom shelf only), the opportunity to see Drake on television at the very next sporting event you watch and an autographed copy of Jurassic Park VI: Drake Be Gettin’ All Prehistorical. 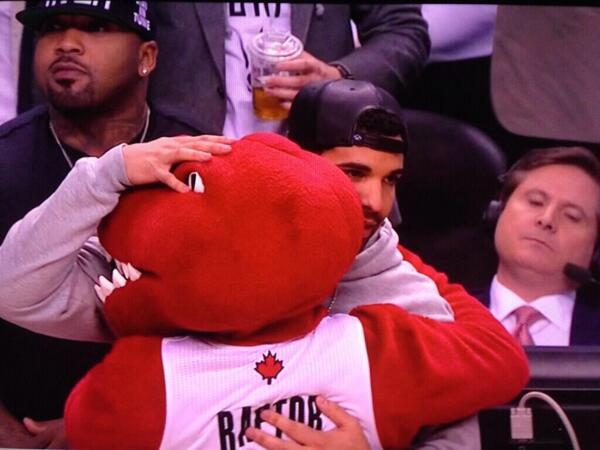