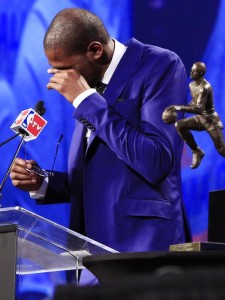 For better or for worse, I’m the kind of man I am today because of her.

Apparently Kevin Durant is too.

In perhaps one of the most moving MVP Award acceptance speeches we’ve ever heard, Kevin Durant not only singled out each one of his teammates individually to thank them, he later addressed his mom in the audience, calling her “the real MVP.”

He singlehandedly belittled every other son’s Mother’s Day present as not too many of us had an extra MVP trophy laying around to give to our moms.  Thanks, KD.

In all seriousness, in a world where professional athletes run amok, Kevin Durant is a pleasant reminder of what kind of people are still out there in this world.

When LeBron announced he was “taking his talents to South Beach,” critics called him egotistical.  Never mind the fact that his “announcement” raised three millions dollars for the Boys and Girls Club.  Most fans preferred the way Durant notified us he was staying in Oklahoma City: with a simple Tweet.

Durant may never have the titles LeBron has.  He may never amass the MVPs.  But he’s got one thing LeBron doesn’t and that’s the humility to give a speech like the one he gave last Tuesday night. 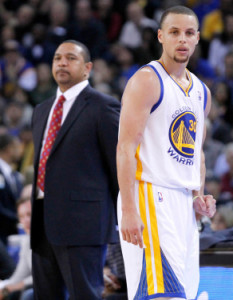 Now on to other basketball matters…

What in the world was Golden State thinking?

I’m no Warriors fan.  I am totally impartial.  No dog in this hunt.  But to fire Mark Jackson, just because they said they would if they didn’t make it out of the first round, is asinine.  That being said, Golden State fans should be used to this by now.

Basically every player in that locker room, including their megastar Steph Curry, said they loved playing for the guy.

They had just come out of perhaps the most emotionally charged first round playoff series in NBA history.  (Thank you, Donald Sterling.)  They had lost their starting center to a rib injury before the series, stacking the odds even further against them and in all honesty, the Clippers they lost to were probably the better team.

So now they start from scratch with the hottest prospect on the market, Steve Kerr, but one who has zero head coaching experience.

It’s no wonder Golden State fans boo team owner Joe Lacob as consistently as they do.  Chris Mullin came to Lacob’s rescue the last time fans ran him through the ringer.  It’ll be interesting to see what happens now that the man who led them to 51 wins this season is back in the broadcasting booth…. or perhaps elsewhere?  (Please stay tuned for the rumor I’m about to spread below.)

Warriors’ brass is just like every other in the league: delusional about how good their team actually is.  While this may have been the best team their franchise ever assembled (yes, better than the TMC teams), that doesn’t mean it was capable of winning a title.

In one of the most awkward press conferences ever, GM Bob Myers gave the patented, and rather vapid, it was time “we moved in a different direction” speech.

We’ll soon see what direction that is and if Kerr is the man to take them there. 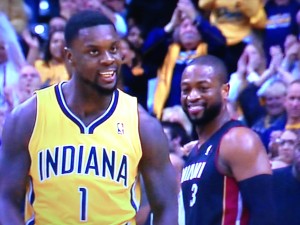 Say Goodnight To The Bad Guy

ESPN is at it again.

Before the Heat-Pacers series could even begin, the website ran with the headline “Stephenson wants Wade’s knee to ‘flare up,’” fanning unnecessary flames of bitterness into a series that really needed no more hype.

Lance Stephenson was asked a simple question.  He gave a simple answer.  When asked about having to match up against Dwyane Wade this series, Stephenson simply said he was going to be as aggressive as possible to put pressure on his opponent’s aching knee.

He wasn’t wishing him ill will.  He just knew that he needed to attack Wade in order to be successful.  As usual, ESPN chose to make the less-marketable Stephenson sound like the villain.

One of these days, the network will stick to simply reporting the news.  I guess we shouldn’t hold our breath.

From the looks of it, after Games One and Two, I’d say Wade’s knee looks just fine.  I guess Stephenson wasn’t wishing hard enough. 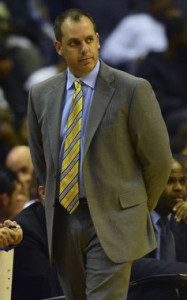 Oh, and one final thought.

Speaking of firings, did anybody doubt the Heat would prove they were mentally tougher than the Pacers in this series, a feat which only took them two games?  Not only does it pay to be experienced but it also helps to have two of the league’s best players on the floor, something the Pacers are far from having.

This Heat team had been 1-7 their last two regular seasons in Bankers Life Fieldhouse but they were also 7-0 in the playoffs after a loss.  Something had to give.  If you guessed that was Miami winning Game Two in Indianapolis, give yourself a pat on the back.

So what do the Pacers need?  More mental toughness.  That’s why former Pacer Mark Jackson is the perfect man to replace the inevitably fired Frank Vogel.

Nothing against Vogel.  He’s done a great job coaching this team (in the regular season) but in press conferences I watched prior to this series, he seemed like a man who had already admitted defeat.  The Pacers’ deer in the headlights look reflects their head coach.  Not pressuring the ball down by six with less than a minute to play in Game Two may have cost him his job.  Nobody said stopping Wade and James was going to be easy but allowing them to take uncontested shots is unacceptable.   Paul George going 4-16 in a must win game won’t help Vogel’s cause either.

Larry Bird has played second fiddle with these Pacers far too long and all of the mistakes mentioned above make Vogel’s firing far more justifiable than Jackson’s.

I’m not saying this will happen (yes I am) but if I were a betting man (which I am), I’d bet Larry Legend sits down with Mark Jackson to have themselves a little conversation about the future of the Pacers and how, together, they can finally knock off a Miami Heat that next year, will have a little more tread on their tires.

If they don’t, they most certainly should.