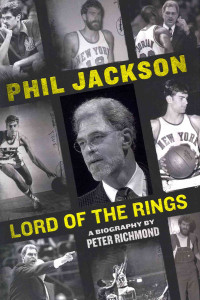 With all this talk about Phil Jackson moving to Manhattan to salvage the woeful Knicks, a team that coincidentally hasn’t won a title since he played for them in the 1970s, I found now to be the perfect time to review Phil Jackson: Lord of the Rings by Peter Richmond.

I wanted to read Richmond’s work because Phil just seems like a cool, collected kind of guy, the kind of guy you’d read a biography about just to see what makes him tick for inspiration’s sake.  After all, not only does he have more rings than fingers, he also found the temperament to manage the greatest egos the game has ever seen.

Imagine smoking weed (and probably good weed) in the hills of Montana, winning championships with one of the coolest teams ever assembled, then going on to coach some of the NBA’s greatest players with all of them paying nothing but the utmost respect.  Oh, and then bedding the daughter of one of the most renowned owners in NBA history.  All seems pretty storybook to me.  I mean, aside from the drawbacks of having to walk around on knobby knees all your life, who wouldn’t want to trade places with Phil Jackson?

There have been plenty of books written by Phil and about Phil but this time around Peter Richmond sets out to discover what made the Zen Master the most decorated coach in the game and more importantly, why he became that way.  Why could Jackson “never, for his entire life, stay away from the basketball court,” why he “could never put aside childish games, why a man with a BA in philosophy, psychology and religion chose instead to join a multibillion-dollar entertainment industry whose sideline-stalking supervisors generally look like coronaries waiting to happen, doing their jobs with all the joy of one who’s just swallowed gravel.” 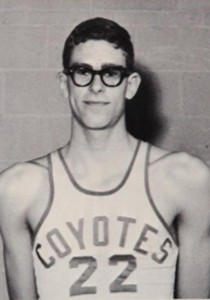 Richmond begins his tale when the young Jackson was “all kneecaps and elbows.”  Later, as a college freshman, Jackson looked to “find the ‘true’ nature of his worldly reality… searching where no one else in jockocracy had thought to look.”  Doesn’t sound like your everyday, run-of-the-mill basketball coach, does it?  That’s because Phil Jackson is anything but that.  The various accounts in this book attest to his nature.

In Lord, Richmond interviews seemingly everyone who ever associated with Jackson to provide a glimpse into his character: cerebral, deep, introspective, methodological, spiritual, everything we would expect from the one they call the Zen Master.  According to his former sharp-shooter Craig Hodges “his aura precedes him.  His energy precedes him.  There’s just a certain kind of charismatic presence.  He’s not trying to be charismatic, or knowledgeable, or a leader.  He just is.”

Jackson’s experience with the Knicks laid the foundation for his future success on the sidelines.  He was “the blue-print for coaching success: the bench player, the role player, the guy who sits and watches and listens, and knows what it means to have twelve men coalesce and win.” 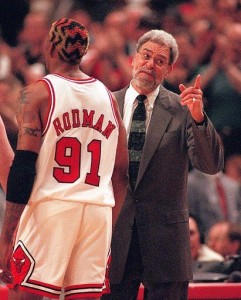 Despite his moments of ink-headed rebelliousness, Jackson’s former rebounder extraordinaire/circus attraction Dennis Rodman perfectly encapsulated the Jacksonesque approach to Bulls’ basketball: “Just five different human beings on a basketball floor, with five different views, but all on the same highway, all going down the same road.”  How Zen-like of him.

Here are a few things I did not know about Phil Jackson that I learned only after reading this book:

Lord of the Rings will appeal to fans of any generation: fans of the early 70s Knicks, fans of the Chicago Bulls dynasties, fans of the Lakers championship teams that followed and anyone who cares to know more about what happened or reminisce about what they might have forgotten. 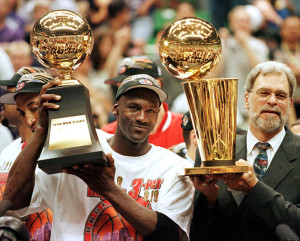 It’s an intimate account of all Phil’s championships, from the personal to the problematic and everything in between.

Those who played for Phil revered him; those who never had the chance would unleash criticisms that were likely rooted in jealousy.  It might seem like Phil always had the best teams but in retrospect, that couldn’t be farther from the truth.  Getting all those teams to meld for as many championships as they did was nothing short of Zen-tastic.  Reading Lord gives us a far better appreciation of that.

The book does get a little Phil-centric at times but why wouldn’t it?  It’s a book about Phil.

I leave you with some of the author’s closing words about the Zen Master.

“Phil never relinquished the search, no matter where it took him.  By studying and sifting and wrestling with the words of the elders of so many civilizations, he leaned not only how to teach but how to be taught – out on the fringe of the pasture but still within its fences.  The natural desire to break away from a radically structured childhood, followed naturally by a self-serving few years in a Knick spotlight, gradually produced a man, not a caricature.  Along the way, he gave athletes from every walk of life, many with their own agendas, a larger sense of perspective about their places on earth.  And he will do so again.”

One can only hope.

21 thoughts on “Book Review: Phil Jackson: Lord of the Rings by Peter Richmond”