So Donald Sterling is a god-fearing man.  Who knew?

In an apparent effort to clear his name and win over the good will of some black folks, the soon-to-be-former owner of the Los Angeles Clippers attempted a little image repair last Sunday morning at the Praises of Zion Missionary Baptist Church in South Los Angeles.

He also probably told them he owns a copy of Boyz n the Hood on DVD.

Is there anything more patronizing than seeing the man the NBA is forcing to sell his team because he told his former lady friend not to bring black people to his games suddenly showing up at a predominantly black church he never knew existed?

And the hits just keep on coming.  I guarantee you the person who advised Sterling to do this has slicked back hair.

To honor the ongoing ridiculousness that is the Sterling saga and the fact that with each passing day, we get closer to not talking about this, I thought I’d host a caption contest.

Seen below, Sterling is photographed waving to the likely, very few people who are giving him an insincere round of applause.  To quote Buggin’ Out from Do The Right Thing, he’s just lucky the black man has a forgiving heart.

The winner of this week’s caption contest will receive the right to bid on Donald Sterling’s Clippers (bidding will not start at a dollar), the right the hopefully one day live in a colorblind society and the opportunity to click off V Stiviano’s upcoming reality TV show every time it hits your television sets. 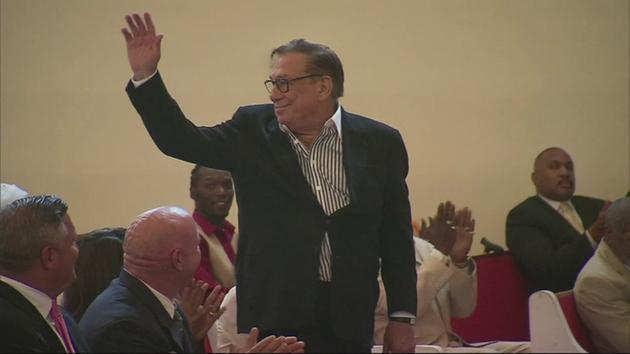