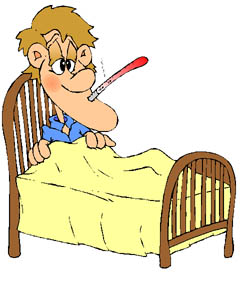 I’ve been bed-ridden lately with a pretty nasty fever so I apologize for not contributing my usual batch of internet clutter.  The good news is that my doctor has ruled out mono, halitosis, gingivitis and chronic tardiness so I got that going for me… which is nice.

This is how I know I’ve been really sick.  When driving home from the doctor’s office the other day, I barely had enough energy to keep my foot on the gas pedal. I looked in my rear view mirror only to find senior citizens tailgating ME.  I guess turnabout is fair play.

So, while laid up from couch to bed to couch and back to bed, trying to escape the pool of sweat I had left behind in each, I was able to semi-groggily catch up on some of the events in the world of sports and all things otherwise that have turned the world as we know it on its head. 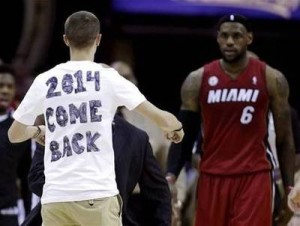 Just when we thought we couldn’t hate LeBron James any more than we already do, he goes and declares himself a free agent.  Suddenly, all of south Florida needs a hug.  Days before he had to legally announce it, LeBron made yet another city-crushing decision, possibly alienating the only fan base he had left.  Of course, Miami can pay him more than any other team but that also leaves them with the inability to sign a supporting cast to replace the aging one they already have.  LeBron’s career is slowly becoming a game of musical chairs.  We can’t fault the guy (or can we?) for using the means presented him to find the best situation that will grant him another ring whether that be in Los Angeles, Houston, Miami.  We already hate the guy and have concluded that however many rings he wins, they won’t equal Michael’s storybook six so we can finally put that argument to rest and never bring it up again.  Today’s is a different NBA and LeBron is doing what he thinks is best to define his career.  He’s 29 years old and has already been to five NBA championships, winning two and losing three.  But it’s how he did it that bothers us most.  Barring his handing us all cold hard cash and a nice, cold glass of Kool-Aid, LeBron will never go down as the greatest basketball player ever.  That’s because, fairly or not, objectively or not, we get to decide who that is and most of us have already made up our minds. 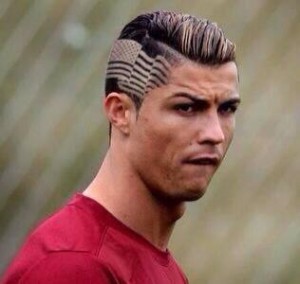 Speaking of turning the world on its head, what the hell is going on in the World Cup?  Spain, Italy, England and Portugal are all going home without even the opportunity to truly enjoy the beaches of Copacabana.  Spain and Italy are your last two Cup champions.  They won’t be repeating.  And the US advances out of the Group of Death leaving Ronaldo to plan his next hair appointment.  To all my soccer-phobes who have complained about ties, your prayers have been answered.  There will be no more ties after the first round.  Only sixteen countries remain.  The good news is the USA is one of those sixteen.  The bad news is that they may have to play Lionel Messi and Argentina in the third round. 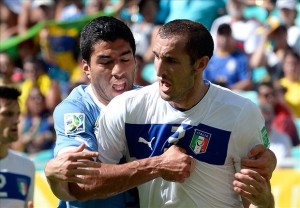 In the waning minutes of the Ecuador-Italy match, Luis Suarez took a bite out of his opponent, literally.  While going after the ball, already up a goal, Suarez bit down hard upon the shoulder of Italian defender Giorgio Chiellini, leaving Chiellini to pull down his shirt and show the bite marks to officials as if he were Giorgio Costanza looking for verification that it was really John Voight’s pencil.  FIFA has since suspended Suarez for nine games, which is the rest of the Cup and beyond.  Suarez is Ecuador’s best and obviously most malnourished player.  This wasn’t Suarez’s first act of Hannibalism either.  In fact, he’s bitten players in two other matches.  I guess Suarez is doing his best to solve world hunger one soccer player at a time. 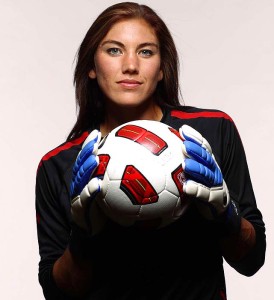 Speaking of soccer hooligans, Hope Solo is back in the news.  The outspoken goalkeeper was once the face of US Women’s Soccer.  You can now see her face on a mug shot near you.  She was recently arrested on domestic violence charges.  On a wine binge, apparently Solo started beating the crap out of her nephew and others at a family get together.  And they say wine is supposed to calm the nerves.  I’ll be the first to admit my family is a bit on the kooky side.  We’ve even been known to partake in a touch of the bubbly when we get together but I don’t recall us ever beating the crap out of each other with broomstick handles.  Yes, that happened.  Solo has since been released and ordered neither to drink nor have any communication with those family members present at the alleged incident.  Leave it to Hope Solo to make Tonya Harding look normal. 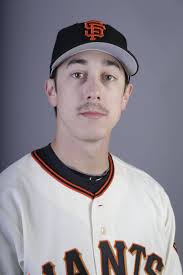 On a more inspiring and far less abusive note, San Francisco Giants ace Tim Lincecum pitched his second career no-hitter.  Ironically both of his no-hitters came against the San Diego Padres which on second thought isn’t so ironic considering the Padres have sucked butt for years.  But there’s a disturbing trend to Lincecum’s no-hitters.  His first no-no came while he was sporting his token “Dazed and Confused” mullet.  Now the mullet is gone but he appears to have grown a pencil-thin mustache, the Boston Blackie kind.  The baby-faced Lincecum is 30 years old but could easily pass for an extra in 22 Jump Street. Congratulations to Big Time Timmy Jim for not twerking after his accomplishment which brings us to our next sports oddity. 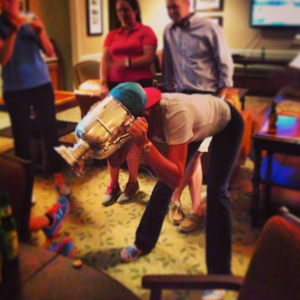 The long-legged, next big thing in women’s golf, Michelle Wie, finally won her first major at the age of 24. Afterwards, she celebrated with friends at a house party by drinking booze out of the trophy, twerking upside down against the wall and giving the finger in random photos.  Fortunately, Hope Solo was not invited.  Far be it from me to sound like an old fart and judge Wie for her behavior.  If I were talented enough to win one of golf’s four majors, I’d probably gallop through the streets naked later explaining to the media I had no recollection of the event.  But that doesn’t change the fact that we should choose our posse more carefully.  Please, people, when you’re out with your friends and they’re doing something embarrassing, put down the videophone and just take a mental picture.  That way we can save TMZ and Instagram all the web traffic. 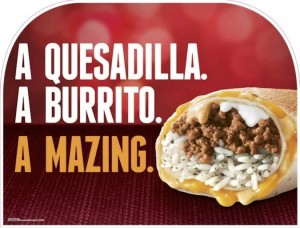 Now on to even more repulsive matters.  Sometimes the mixture of two food groups can result in pure delight.  Take Reese’s for example.  The farmhand turned genius HB Reese once had the good sense to combine chocolate with peanut butter and in doing so, made the world a far better place.  I’m not so sure Taco Bell is doing the same.  The good people at the Border just came up with the “Quesarito” which is, ingeniously and disgustingly, a combination of a quesadilla and a burrito.  Leave it to the fast food industry to continue to harden our arteries every chance they get.  Here’s the thing.  They can call it whatever they want.  All Mexican food is the same.  Tacos, enchiladas, burritos, quesadillas, they’re all sandwiches with interchangeable ingredients, whether it’s beef or cheese or rice or whatever.  Just substitute the bread for a hard or soft taco or tortilla shell and voila… your Mexisandwich.  Please tell me I’m not the only one who realizes this.  And lastly, speaking of fat and unnecessary… 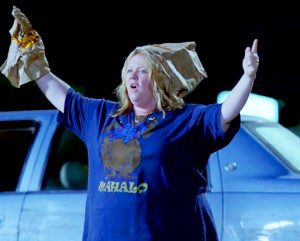 There comes a point in every actor’s life, if they’re unfortunate enough, where they oversaturate the market with their image.  I’m afraid that’s now officially the case with Melissa McCarthy, whose new film Tammy is set to be released July 2nd.  As I’ve been bed-ridden these last few days, I’ve been forced to witness more than a few trailers for this film.  I didn’t laugh once.  In fact, I couldn’t tell whether my nausea was derived from my fever or the trailers themselves.  I’m just saying I’d like to spend a day without seeing her riding upside down on a Jet Ski, sipping on a Slurpee or sticking up a fast food restaurant, which I guess is somewhat realistic since she couldn’t possibly be sticking up a health food store.  If this film receives anything above a 3 on the IMDB scale, it’s because the McCarthy family has multiple accounts.  This will be Melissa’s sixth film in the last three years in which she plays essentially the same character, a charmingly overweight, sassy, rough exterior, soft interior, unkempt woman you don’t want to be around all that often because she always has something quippy to say.  Don’t get me wrong.  She was great in Bridesmaids (nominated for an Oscar) and was typecast in Hangover III as Alan’s one true love but how are those roles any different from the one in which she played the cop with Sandra Bullock?  Her agent is clearly the hardest working person in show business keeping Melissa laughing all the way to the bank.  It’s just too bad the rest of us stopped laughing a long time ago.