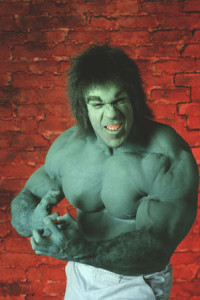 I recently celebrated a birthday.  Somewhat surprisingly Johnny Manziel did not attend the festivities.  Apparently he didn’t get the memo.

There was once a time where many of us reveled in the opportunity to meet famous people.  Some of us probably still do.  After all, it’s only human to become awestruck by stardom.  I remember meeting Lou Ferrigno and Wade Boggs as a kid and being totally tongue-tied.

As one matures, however, there comes a point when stardom doesn’t hold the same meaning.  We get caught up in our own daily (or in my case nightly) grind that the millions upon millions of dollars celebrities “earn” ceases to impress us.

Now is that time, at least for me. 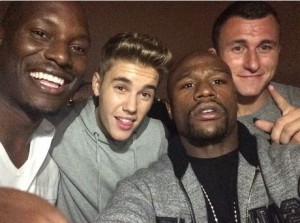 I recently saw a picture online and had to question to myself what the hell was going on.

This picture showcased actor/rapper Tyrese, Cleveland Browns quarterback Johnny Manziel, welterweight and Super welterweight champion Floyd Money Mayweather and teen pop sensation Justin Bieber all smiling for the camera.  Apparently, Biebs was throwing a little shindig at the crib and all his homies were invited.

Don’t get me wrong. I like to partake in the occasional social gathering.  In fact, some might even consider me a bit of a social butterfly.  But who in their right mind would ever go to a party with Manziel, Money May and the Biebs and not expect something bad to happen? 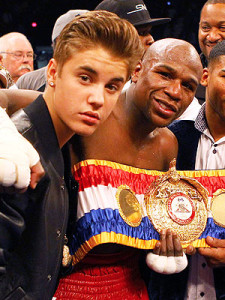 And just out of curiosity, why the hell are Mayweather and Bieber best buddies?  Mayweather is 37 and Bieber is only 20.  How many of your closest friends are half your age and not old enough to legally drink?  Is it because they’re the only two people on the planet who can afford to hang out with one another?  Other than their bankrolls and probably a couple of bad decisions, what could these two possibly have in common?

Manziel’s got star power but there’s no way he has the coin to hang with those two, not to mention he’s one Instagram photo away from being suspended by his employer.  After signing with the Browns, Manziel probably makes only a couple of million a year.  That’s a night out on the town for Money and Biebs.  Is Mayweather backing him?  Did Biebs spot him a loan?  I can see it now, Johnny Football walking to the bar for one last cocktail, reaching into his pockets to find only lint while Money nods to the bartender telling him he’s good.  And what the hell is Tyrese doing in this picture?

Maybe it’s just me but this has all the makings of a gathering I’d rather not attend.

What’s the best case scenario?  You, Money and the Biebs all share a heartfelt moment.  They welcome you into their circle of trust and fly you first class to their biggest fights and concerts while you boast to your former friends how you’re kicking it at Ceasar’s for the weekend.  What’s the worst case scenario?  One of Money May’s security guys pummels the life out of you for looking at them funny while the Biebs shrieks “Intruder!!” at the top of his lungs and maces you to boot.

I guess we shouldn’t be surprised when these kinds of photos and others like it are leaked.  It’s just another case of fame spiraling out of control and social media continuing to capture the ever-expanding differential between the haves and have-nots.

Fortunately, those of us who know the difference between what “having” and “not having” actually means are not bothered by this in the slightest.

16 thoughts on “A house party I’d rather not attend”