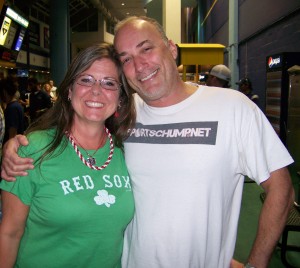 As many of you know by this point, SportsChump.net is always open to having guest contributors write about their sporting experiences.  Said contributors are always imaginative, avid and of course, poorly reimbursed for their efforts.  They do it for the love of sport.

One such person is the lovely and talented Dee Dee.

You all remember Dee Dee because she’s kicked your ass in every single one of my contests you’ve entered.

This time around, Dee Dee took a trip to the hallowed grounds of Wrigley Field to celebrate the ballpark’s 100th anniversary.  She was nice enough to share her story with us… or at least what she remembered of it.

Ladies and gentlemen, I hereby submit for your approval…. Mrs. 100th Anniversary Celebrator.

Back in 2010, the news media and ESPN started promoting Fenway Park’s upcoming 100th anniversary celebration in 2012.  I knew immediately that I would be going to Boston for the first time ever to help Fenway celebrate!  I mean, my fantasy baseball name was Dee Dee Dreams of Fenway for crying out loud and I certainly dreamt of Fenway – and in all honesty, I still DO.

During our visit in September 2012, I enjoyed 3 games at Fenway Park, two tours of Fenway, participated in a Meet and Greet with the players, scooped up some Fenway Park dirt, James Shields threw me a baseball and I saw Andrew Miller doing the Gator Chomp on the pitcher’s mound as I yelled out to him that we were from Gainesville – Go Gators! I also was honored to be at the game Boston recognized their 2004 World Series Champions.  The World Series Trophy was on the field! The team rode around the field in duck boats and the WS trophy passed right in front of me because I was standing at the brick wall beside the visitor’s dugout! 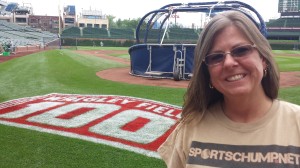 During Fenway’s celebration that year, Chicago began promoting Wrigley Field’s 100th anniversary in 2014 and you know it; my vacation plans for 2014 were set. So, once again, I packed my Sportschump t-shirt that I had won in a Sportschump Contest; the same shirt I wore to one of my visits to Fenway Park during their 100th anniversary celebration!  We (Yaz, Tom and I) had a Wrigley Field tour at 10am on Friday, June 20, 2014 and it was amazing. I could not keep my eyes off the ivy walls, the pennant flags, the roof tops and the old fashioned score board.  I wished Andre Dawson would have run out of that ivy! Do you know that Wrigley’s scoreboard has never been run by a woman? This was shared with us by our female tour guide, who said it was because women were too smart to do that job…. There is no air conditioning in the scoreboard nor running water, which means no bathrooms either. You got it guys, pull out the PVC pipe and funnel if you must, you know… gotta go.

I love sports and stats but I realize that I am a minority among all the men that also love sports and stats. Although I am proud to be the only female winner of a Sportschump contest, and the only two-time champion of a Sportschump contest, I am very comfortable to agree with the female tour guide and leave the scoreboard at Wrigley Field for the men! 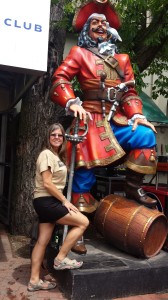 During the tour, I was able to scoop up some Wrigley Field dirt! I have to admit that the excitement of the tour was not at the degree as it was for me at Fenway Park, but I was still so glad to be at the nation’s second oldest ballpark. After the tour, we sat at the Captain Morgan Club and drank delicious hard cider waiting for the game to start. The gates opened at 1pm and we collected our Ernie Banks bobble head as we entered. The Cubs were hosting the Pirates for a 3:05pm game. As soon we entered the park, I took off with my camera to watch the Pirates batting practice. I enjoyed watching the players and seeing 2013 NL MVP Andrew McCutchen.  Chris Stewart signed my ticket and I tried to get a baseball, but they were only giving them to kids! Then I realized, I should have brought my 10 year old son with me, who by the way doesn’t have any interest in baseball!  I should have brought him anyway to push him out on the field to get his Mama a Wrigley Field 100th anniversary practice ball. That was a doggone missed opportunity for sure.

We had awesome seats – second row in the second section behind home plate. I visited with the local men in the row in front of us and was interested that they had no care, nor opinion about the Roof Tops/ Wrigley Field controversy. I also enjoyed watching their cup game. Here is the scoop:

At the start of the game all the participants put $1 in the cup. The cup is passed from person to person after each batter.  The person holding the cup:

o   Home Run the entire contents of the cup. Then all players add $1 to the cup and they start over 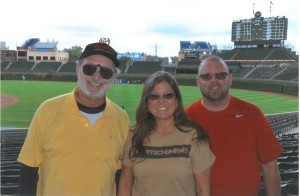 You are not allowed to excuse yourself from the game. Once you start, you are in for the entire game.  If money is left over after the game, then the participants decide on what to do, which is usually used to buy more booze.

On a recent head-to-head week in my fantasy baseball league, my friend, Yaz, and I made a bet that the loser would buy the winner a hotdog and beer at Wrigley Field.  Well, I was the winner that week so Yaz had to pay up. We both agreed that we would go to the concessions to get the freshest and coldest, so in the bottom of the 3rd with a 0-0 score, we were off to get dogs and beer and pizza for my husband (Tom). I was at the bottom of the steps trying to carry beer, soda, pizza and hotdog when I heard “AND THAT’S A THREE RUN HOMERUN BY RIZZO”!! I have never run up steps so fast in my life. I stood there, bewildered, watching the players round the bases as I realized the SCORE was now 5-0 Cubs and I had just missed a 5-run inning, including that 3-run homerun. I was SICK! My husband looked at me and said, “I knew you’d be pissed.” The men I had been talking to were saying “That’d teach you for leaving the game!” Will the torment ever stop? While in Fenway, I left to get a hotdog and a foul ball was hit right beside my seat. Had I been there, I probably would have caught that damn ball, but noooooo, I was out of my seat getting a hot dog. Really? Have I not learned my lesson? I guess not. But I was in my seat to see a 3 run inning by the Pirates. The final score was 6-3 Cubs.  We saw the glorious pennants coming down, then replaced by the White W flag to announce the Cubbies had won the game. It was SO EXCITING. Then we sang the “Hey Chicago, What do you say, The Cubs are gonna win today.” To top all that off, the men that were playing the cup game actually gave us beer! Now that’s some nice hospitality for this southern girl. 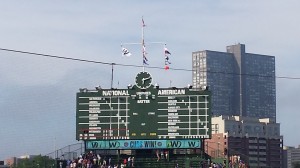 So within two years, I have enjoyed two 100th anniversary ballparks, game 3 of the ALDS playoff game at the Tropicana – Red Sox vs Rays, and even a game for my birthday to celebrate Florida Gator Baseball’s 100th Season (Vandy beat the Gators, who are now CWS Champs). So what’s next for this Mrs. 100th Anniversary Celebrator? My husband is glad to know that there is not another 100th anniversary until 2062, if Dodgers Stadium makes it that long!  In the meantime, there are many more ballparks for me to visit just because I love the game!