Tiger Woods had just finished his opening round of the 2014 PGA Championship after shooting a disappointing 2-over 74.  He stood in the Valhalla parking lot stretching his back, joshing with friends and loading his clubs into the back of his prepaid Mercedes SUV. 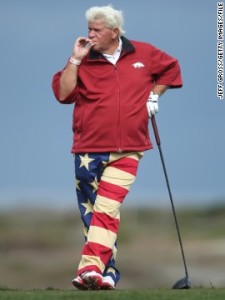 Shortly thereafter, another SUV pulled up beside him, probably also prepaid for the athlete that rode in its passenger seat.

That passenger was John Daly.

Daly had just finished five-over-par, three strokes behind Tiger and eleven strokes off the lead.  While Tiger moaned about his round, Daly probably couldn’t have given a flying fuck about his.

I watched both TNT and the Golf Channel’s coverage of Thursday’s opening round and saw not a single glimpse of Daly who, by the way, is a former PGA Champion.  I guess he’s no longer the draw he once was.

If you’re not familiar with John Daly, he’s one of the more charismatic figures on tour.  After winning two majors (PGA – ’91; British Open – ’95), Daly pretty much disappeared from the face of the earth… or at least his golf game did.  If it weren’t for the bright colors he currently wears on the course, nobody would even know he existed.

But back in the day, Daly was exactly what the tour needed.  In fact, he might still be what it needs: a brash, chain-smoking, occasionally alcoholic monster-hitter who brings a Happy Gilmore-like persona to the game. 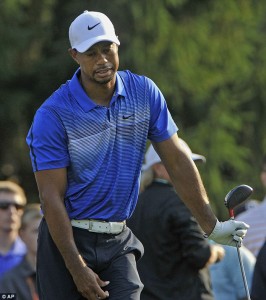 That might just be what Tiger needs to get his game back as well.

We’re all aware of what Tiger has been through lately.  We don’t need to rehash his exploits.  He missed the cut again this weekend, putting up back-to-back rounds of 74.  Professional golf is one of the toughest mental games out there and right now Tiger’s head is in the clouds.  It’s certainly not on his golf game.  We can point to an aching back or a surgically repaired knee but anyone who watches the former great play eighteen holes can tell the problem lay squarely between his ears.

So maybe a debaucherous night out with Daly is just what the doctor ordered, like listening to that devil on your shoulder encouraging you to have just one more, except that devil is a blonde-haired, pot-bellied, professional golfer.  After all, if anybody can understand what Tiger is going through without judging him, it’s John Daly. 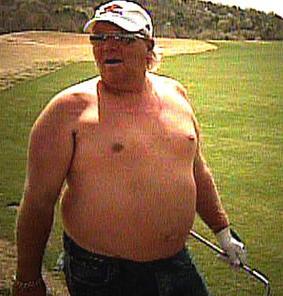 Tiger need no longer concern himself with what other people think.  Despite his allure, he has no place to go but up.  I say it’s about time he goes on a Daly-like bender to return himself to his natural state.  Picture if you will, Woods and Daly on a drug-induced, Fear and Loathing-like excursion to Las Vegas in an attempt to rediscover the golfer formerly known as El Tigre.  Their union has Miyagi-Danielsan potential just with a lot more bourbon, strippers and cigarette butts.

I don’t mean to promote infidelity but whatever Tiger Woods was doing in his past life worked.  What he is doing now is not.  In fact, golf’s television ratings are so dependent upon his success that I’m surprised the Tour hasn’t secretly sponsored his bender.

Either way, Tiger’s clock is ticking.   Jack Nicklaus’s record of 19 major (which Tiger is still five short of) becomes more unattainable with every missed cut.

Perhaps John Daly can be the answer.

At this point, it couldn’t hurt.

25 thoughts on “What Woods needs: A little bit of Daly in his life”