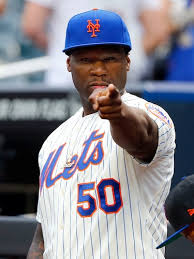 I like making fun of people.  I mean, what’s the point of running a sports blog if you can’t blast the ones you love?

We’ve already questioned his courtside seating arrangements although, to be perfectly honest, hanging out with Meryl Streep at Lakers games is probably an upgrade from the time spent with his usual posse.  He’s also been caught taunting Floyd Mayweather for his inability to read, as if professional boxers, or gangsta rappers for that matter, are known for being the most literate people on the planet.

Either way, Fitty should probably work on his baseball toss before throwing stones.

Earlier this baseball season, Fitty was giving a post-game concert at CitiField, providing Mets fans with something they haven’t seen on that field in years: Quality entertainment.  The organization asked him to throw out the first pitch that evening, which he did.

Let’s just say he should probably stick to rapping.  The moment that followed immediately ranked as everyone’s worst opening pitches of all time.

50 Cent’s opening pitch at the Mets game. Let’s just say if he were playing darts, he would’ve hit the 8 ball in the corner pocket.

SO PISSED. was about to go to sleep and 50 cent’s first pitch from New York flew threw the window and hit my head

I was going to leave Fitty alone for his athletic inability but then I saw this video of a 100-year old woman throwing out the first pitch at a Cardinals game.  Now obviously she didn’t walk all the way to the mound and she had some assistance but at least she got the ball over the damn plate. 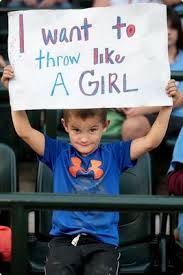 Then the Rays, in their constant efforts to distract fans from how mediocre their team really is, brought in a female pitching phenomenon who proceeded to strike out the team during batting practice with a barrage of knuckleballs.  It was a welcome change from Rays’ hitters striking out during actual games.

A few weeks after, this lovely Asian girl had trouble reaching the plate but that’s because… SHE HAD JUST BROKEN TEN CINDERBLOCKS WITH HER HEAD!  I’d say she gets a pass for her errant throw.

Then there’s leggy supermodel Crissy Tiegen who made herself a few tequila cocktails before throwing out the first pitch at a Dodgers game.  The ball reached the plate.  Perhap Fitty should have considered a drink or two before stepping on the rubber.

And now we’ve seen Little League phenom, 12-year old, Mo’ne Davis mow down batter after batter while Fitty is airmailing balls past the first base line.  Perhaps it’s time to replace the phrase “throw like a girl” to “throw like a rapper.”

Fitty clearly needs a do-over and a pitching lesson.  I’m sure any one of the aforementioned would help him out.  Or maybe he should just stick to doing what he does best.  If we only knew what that was.

13 thoughts on “Those who can’t pitch, rap: The curious case of the man who can’t throw”