This pre-season, two NFL players have been talked about more than any others.  Those two men are Michael Sam and Johnny Manziel.  (And BOOM!  Just by mentioning those two names in my opening paragraph, my website received a million more hits.  Advertising dollars, here we come!)

Saturday night in Cleveland, Ohio, Sam’s Rams met Manziel’s Browns in an otherwise meaningless preseason game had it not been for Michael Sam sacking Johnny Football.  After the takedown, Sam mocked Manziel by doing his patented “money” sign.

This is the same game, mind you, in which the oft-unhealthy Sam Bradford tore his ACL yet all anyone could talk about was the sack.  Note: a Google search of “Manziel Sam” garnered over 2,500,000 results, one of “Bradford ACL” barely got 500,000.  Just goes to show us where our priorities are but I digress.  I’m as guilty as the next blogger.

Of course, Twitter had a field day with the sack so I say, if you can’t beat ‘em, join ‘em.  Here are some of the more comical Tweets that caught my eye from the sack heard round the world.

So Johnny Manziel has a Drake tattoo on his wrist, and we’re still pretending Michael Sam was the first gay player drafted? OK.

Michael Sam sacking Manziel might be the most talked about but meaningless play in the history of the NFL. 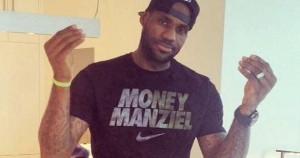 The real question with Sam sacking Manziel is, how does this affect LeBron? @SportsCenter

Was Michael Sam making the “Money Sign” after he sacked Manziel or trying2 get glitter off his finger tips?

Tonight on sports science. Michael Sam sacking manziel. HOW DID HE DO IT?!

Monday on First Take: “Did Sam sack Manziel ‘gay enough’?” …and other nonsense for the morons that watch that show.

Tomorrow on First Take: Does Michael Sam’s sack of Johnny Manziel make Joe Flacco Elite? We’ll have Jodeci in studio for their take.

13 thoughts on “Michael Sam sacks Johnny Manziel!!! In other less important news, Sam Bradford is out for the season.”