From time to time, SportsChump will invite guest authors to contribute their opinions on this website.  The purpose of this is two-fold.  One is that so others can use the site as a portal to express their views and generate healthy discussion.  The other is so you don’t get tired of reading my shit.

Dr. Milhouse has written for other online publications which shall remain nameless.  Now he makes a special guest appearance on the Chump.  I ask that you grant him a hearty welcome as he discusses the eventual, hypothetical yet inevitable return of Ray Rice to the National Football League. 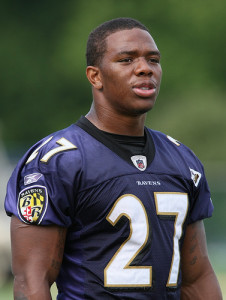 Sports writing isn’t all that difficult, as long as you’ve got a taste for BS. All you need are some cliches, maybe a one sentence paragraph, followed by sentence fragments lacking any grammatical correctness, all for the sake of “relaying the story.” As we all know by now, Ray Rice was released by the Ravens and suspended “indefinitely.” And as awful as his crime was, there are football players playing today, and players that have played in the last decade, that have done far and beyond worse than he did, with a far lighter sentence. Heck, Rice isn’t even going to get a criminal conviction out of this, thanks to his pre-trial diversion program. So, anyone who thinks that “indefinitely” means anything other than “for this season” is deluding themselves. Rice will serve his suspension, get picked up by some team in desperate need of a solid running back, and get his chance to change the narrative from “scum-sucking woman beater” to “man in need of a second chance.”

Since everyone is going to be scrambling to write that story this time next year, I figured I might as well beat them to the punch. So, I figure we can publish this now, and come back in twelve months and fill in the blanks, like Mad Libs. The hackneyed quotes will be the same. No sense in waiting to actually put the words on paper. Someone let me know when Sports Illustrated needs me to fill in their “About Me” section at the end of my cover story.

The Long Road to Redemption for Ray Rice

The familiar stocky build of a professional football player is difficult to miss. It’s even more difficult when the figure is walking around the quiet town of New Rochelle, New York. But that is what the residents of New Rochelle became all too familiar with in the last year. Ray Rice, having spent the last year in exile due to his arrest for aggravated assault in March of 2014, went back to his roots and back to his home, as he tried to come to terms with his trials, tribulations, and mistakes. All of his reflection and penance paid off when he was offered a one year deal by the <<INSERT TEAM NAME HERE>>. 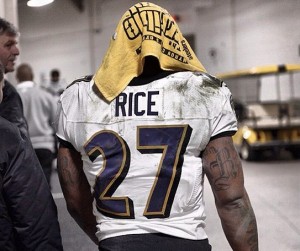 “It was incredibly difficult to have the world crash down around me like it did,” Rice said, in an exclusive interview just before the season started. “One moment, I was on top of the world, living out my childhood dream of playing professional football. Then, one night and one mistake later, and it all came down like a ton of bricks.”

The fateful night Rice mentions is one that has been discussed and debated repeatedly over the last 18 months. His wife (then-fiancee) was knocked unconscious during an argument at the Revel Casino in Atlantic City. Both of them were arrested, and he was entered into a pre-trial diversion program. After completing the program, the charges were dropped, leaving him without a conviction, but not without the grim specter of a title that will follow him forever, “Domestic Abuser.” 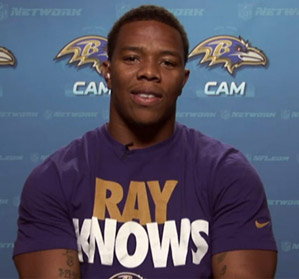 “To have the league and my team, who insisted they would stand behind me, turn on me like they did, it was tough. It hurt. But I’ve done my time, and I’ve put it behind me. I may have been knocked down, but I wasn’t knocked out. I got up, dusted myself off, and moved forward. I received forgiveness from my wife and God, and now I just want to move forward with the new season.”

The new season started well for Rice. He ran for over one hundred yards and a touchdown in the <<TEAM NAME>> Week 1 win. After the game, Coach <<COACH NAME>> said, “Ray did well, like we knew he would. He had his demons and worked to get past them, and now that he’s been reinstated, we’re happy to have him as part of our family.” Asked about the controversy surrounding the signing, teammate and All-Pro <<TEAMMATE NAME>> said, “He’s done what the league wanted him to do. He sat on the sideline, he worked out his stuff with his wife, he kept in shape, he got himself together. He’s a whole new person now. I look forward to seeing him help our team win.”

Rice begins his journey following in the footsteps of the athletes who came before him, all working to get back in the fans’ good graces after brushes with the law. At Age 28, he begins his 9th season in the league as the player no fan base wanted. But like Jerramy Stevens and Michael Vick before him, he hopes that playing time, victories, and championships can make the bad taste fade away.