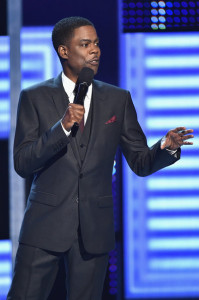 In the wake of the Donald Sterling scandal, comedian Chris Rock gave a hysterical yet true depiction of wealthy white America in his opening monologue of the 2014 BET Awards.

“Now let me get this straight.  An 83-year old white man doesn’t like black people.  Is that news?  Come on.  First of all, a black person couldn’t look him in the eye until he was 45.  The first black man he ever met he got for Christmas.”

Rock’s humor and enlightening of racial strife in this country had the audience in stitches but that didn’t change the fact that a multi-millionaire was forced to sell his business because of his beliefs.

While some argued that Sterling having to sell the Clippers was entrapment based on an illegally recorded conversation, public opinion had already turned on Sterling, particularly considering NBA players secretly threatened to strike if he maintained ownership of the team.  A deal has since been made to give Microsoft CEO Steve Ballmer, another rich yet hopefully less racist white man, control of the team.

Apparently Sterling isn’t the only bigot in the NBA, a league which ironically makes the bulk of its money off the popularity of the African-American athlete. 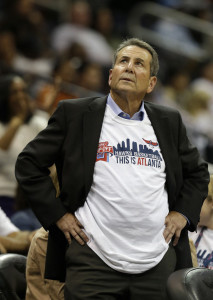 Soon to be former Atlanta Hawks owner Bruce Levenson is selling his team based on inappropriate and racially insensitive comments he made in the past.  This won’t get nearly the publicity the Sterling case got but it’s equally as newsworthy.

This was Levenson’s prepared statement:

“I wrote an e-mail two years ago that was inappropriate and offensive.  I trivialized our fans by making clichéd assumptions about their interests (i.e. hip hop vs. country, white vs. black cheerleaders, etc.) and by stereotyping their perceptions of one another (i.e. that white fans might be afraid of our black fans). By focusing on race, I also sent the unintentional and hurtful message that our white fans are more valuable than our black fans. If you’re angry about what I wrote, you should be.”

Never before in American history has it sucked so bad to be white and wealthy but I guess turnabout is fair play.  Rich white folks have owned everything in this country since they disembarked here some 400 years ago.

Statistics point to a severe and disproportionate lack of minority team ownership in professional sports which might be slightly skewed simply because owners of professional sports franchises generally don’t sell… unless of course, they say something inflammatory and are forced to.  Plus it’s not like a ton of people are walking around with an extra two billion dollars in their pocket to drop on a sports team, particularly not minorities.  Oprah Winfrey we are not.

We can argue about the racial and socioeconomic inequalities that exist in this country until we’re blue in the face.  That doesn’t change the fact that racial stereotypes remain and that we all have to do our part to understand and either respect or combat them.

Atlanta GM Danny Ferry’s comments further fueled the fire when he said that Miami Heat forward Luol Deng “has a little African in him.”  I’m not sure what exactly is going on in Atlanta but it ain’t good.  And a brief memo to Ferry, who like Deng played basketball at Duke, a school known until now for its smarter athletes.  Deng is African. 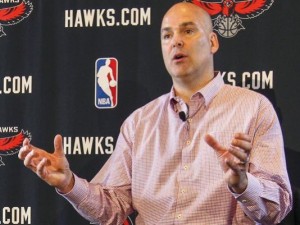 Levenson, Sterling and Ferry aren’t the first public figures to have their reputations tarnished through their foolish comments.  Mel Gibson and Michael Richards have been ostracized after their rants about minorities.

Listening to the likes of these guys when they’re untapped and uncensored gives us insight into their character.  That’s not to say all white people in this country are bad and all minorities are free of guilt.  Clearly that is not the case.  It does, however, become harder to justify the total lack of class of those born with a silver spoon in their mouth when the rest of us struggle to get by.

I guess them paying their fellow man a certain amount of respect is a little too much to ask for.

24 thoughts on “Another one bites the dust: Atlanta Hawks owner to sell share of team after racist remarks”