Stat Of The Day

No sport has bastardized the use of the statistic more than Major League Baseball. 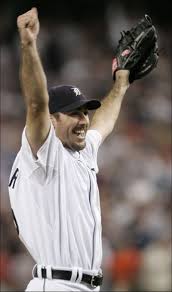 Headed into the bottom of the fourth inning of Game Two of the ALDS between Detroit and Baltimore, Victor Martinez and Nick Castellanos both homered to give the Tigers a 5-2 lead.

TBS led off the following inning with this statistic:  When Justin Verlander receives 5+ runs or more support, his career record is 111-2.

Game over, right?  I mean, no team (okay, two) had ever come back to beat Verlander when he has that much run support.

Fast forward one inning.   A JJ Hardy RBI double made it 5-3.  TBS then flashed this statistic: Justin Verlander has surrendered a lead 17 times (most blown leads in MLB)

Didn’t those two statistics just entirely contradict themselves?  Weren’t there people in the broadcaster’s booth scratching their heads on that one or were they not paying attention?

So which is it?  Is Justin Verlander unbeatable when he gets that much support or does he cough up more leads than anyone in the league?  Is five his magic number or do the Tigers end up magically coming back the following inning once he gives up that many?  I’m confused.

Back in the day, baseball’s use of statistics was much simpler.  Batters were judged on their hits, home runs, RBIs and batting averages, pitchers by their wins, losses, ERA and strikeouts.  And of course, the eye test worked pretty well too.  We knew who was good.  We didn’t need a glossary and a spreadsheet to figure it out.

These days, we have more baseball statistics than there are people in China.  I’m still not sold on the whole Wins Above Replacement (WAR) as an end-all, be-all statistic and we’ve already discussed how I feel about Quality Starts.  Without sounding like an old fart, I long for the days when there were only six statistics on the back of a baseball card and not a lengthy numerical explanation of why that player is great.

As it turned out, the Detroit-Baltimore game was a barnburner, more must see TV for these 2014 playoffs.  The Orioles ended up coming back, scoring four in the eighth, besting Verlander and proving one of those statistics to be true and the other one, not so much.

New Kid On The Block

Who the fuck is Eric Hosmer and why hadn’t I heard of him until a week ago?

Here’s all Hosmer has done in the two biggest games of his life.

In the wild card elimination game against Oakland, Hosmer went 3-4 with two runs, an RBI and two walks.  His biggest hit came in the bottom of the 12th when he uncorked an unattainable triple off the left-centerfield wall.  Minutes later, he would later score the game-tying run. 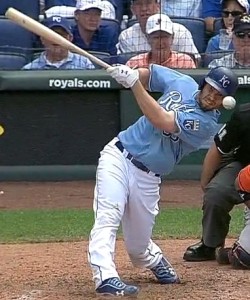 In Game Two of the ALDS, Hosmer once again went 3-4, hitting a two-run home run in the top of the 11th giving the Royals the lead for good.  He’s currently batting .429 in the post-season.

Here’s your Hosmer primer for those of you, like me, who weren’t in the know.  Hosmer is 24 years old.  He was the third overall pick in the 2008 Major League Draft.  (FYI, the Tampa Bay Rays had the first pick in that draft and selected Timothy Beckham.  I’ll give you all a second while you ask a collective “Who?!?”)

Hosmer was born and raised in South Florida where he was a highly touted high school baseball player.  The Royals called him up in 2011 and he hasn’t looked back since.  After four years in the majors, he’s a career .275 hitter, which means he’s stepping it up a notch this post-season.  A 150-point notch!  Keep this up and he’ll have pitchers pitching around him if they haven’t started to already.

This Royals team is a blast to watch and an easy team to root for even though you can’t name anyone on their roster.  Well, now you can.

We may want to consider that the theme song of these 2014 playoffs because so far the teams with the higher payrolls are getting no love at all. 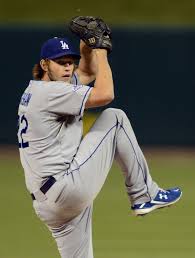 The Dodgers, the team with the highest payroll in baseball lost the opening game of their series after being up 6-1 in the 5th inning.  And they had their ace Clayton Kershaw on the mound!  They allowed the Cardinals to score a ghastly eight runs in the top of the sixth.  The Cardinals, whose payroll ranks 13th in the league, stole home field advantage in that series as it no goes back to St. Louis.

The Tigers boast the fifth largest payroll in Major League Baseball.  In fact, you can’t say Tigers without mentioning the fact that they have the last three Cy Young Award winners in their rotation.  A lot of good that’s done them.  Matt Scherzer and Justin Verlander were rocked by Baltimore hitting the first two games.  The Orioles payroll ranks fifteenth in the league.

And while the Giants and Nationals payrolls only differ by $20 million, there’s a world of difference between that of the Angels and Royals.  The Angels have four guys on their roster making over $16 million a year.  The Royals have only James Shields making $13.5 and they brought him in at the trading deadline.  The Royals payroll is not even $100 million.

So far this has been a great post-season for Major League Baseball especially if you’re a fan of the underdog because regardless of whether or not they can afford it, they’re the ones getting all the love.

20 thoughts on “Initial Thoughts on the 2014 MLB Playoffs”